I have noted before that Donald Trump is proposing to change the US corporation tax system. The essence of the change seems to be that profits attributable to exports will not be taxed whilst there will be no tax relief on imports. I have already suggested that this could be disastrous for international tax but assuming the arrangement only applied to the USA let me look at another consequence. This reform could be pretty disastrous for some US companies and the people of the USA.

Take an example of Walmart. This is a summary of its trading performance from its 2016 accounts. The gross margin is about 24.3% year after year. And overheads are about 20%,  leaving a profit margin of a not untypical 4% or so for a retailer: 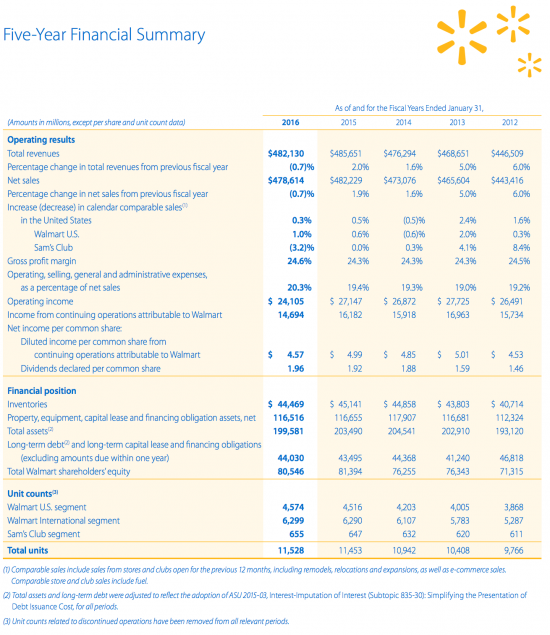 Now suppose the US tax rate is reduced to 20% but the Trump proposal is implemented. Walmart now gets no tax relief on imported goods. It does not matter whether they buy them direct or not: the price will go up either way. And for ease let's presume Walmart makes no  export sales, which is not unreasonable. And let's assume half of all that Walmart sells is imported.

Now Walmart either makes a loss of more than 3% or prices for ordinary Americans are going to increase by 7% or so to keep profit margins fixed. This is obvious: this tax is a VAT in all but name, but acting in isolation.

This change is not going to be received well, I suspect, especially when some companies are going to pay substantially increased rewards to their shareholders as a result of the changes whilst what we might call 'hardworking families' will be pushed to the limit by it. This is a tax to increase inequality if ever there was one.

I rather hope Trump makes this change before the mid term elections. That would make them interesting.  Although to be honest I really don't think this is going to happen at all, like many Trump ideas. Which will also make those mid terms interesting.