The UK has not invested enough to be prosperous

I am at a conference at Manchester Business School today. Prof Sheri Markose of Essex University has argued this morning that the UK is simply not investing enough in new capital formation to maintain an effective. The argument is fairly compelling. The following data on gross capital formation comes from the World Bank. First, for the world: 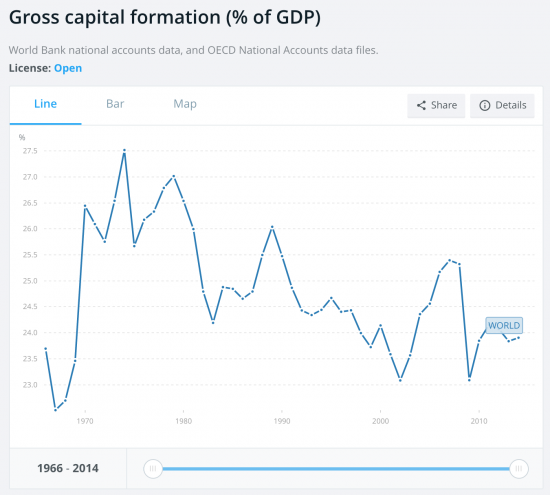 Then for the UK: 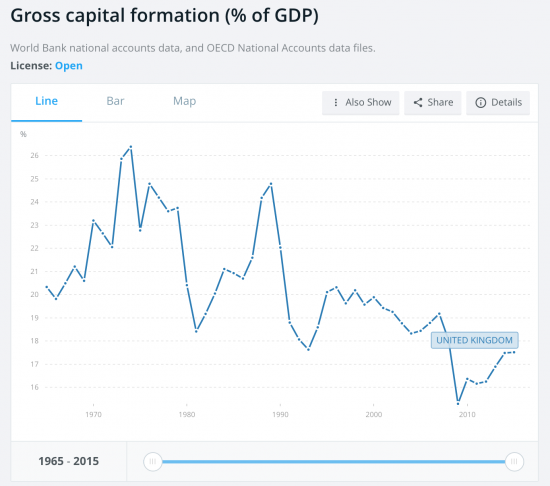 Three relatively straightforward observations: first, the world has, broadly speaking a rate of about 24% post 1995.

Second, the UK, in contrast, has a markedly downward trend over the same period, and the rate has declined from around 20% to about 17%. We may be 7% short on the world at large for maybe 20 years: it's a staggering deficit.

Third, this is not because the UK did not have the capacity to invest. UK multinationals and the UK government had ready access to capital markets during this period but they chose not to invest in the UK.

And the result? We are massively undercapitalised. We just do not have the private and public sector base for growth of any sort, sustainable or otherwise now.

I see no chance of that changing right now without a major change in political thinking which Brexit will not deliver: the emphasis within the UK on making financial but not real returns that can be shared by the community at large will not be changed by Brexit.

There is only solution and it is the state. We need green infrastructure quantitative easing to address this. I cannot see anything else that will.