The government is planning a reduction of 15.3% in non-pension benefit spending as a proprtion of GDP by 2022

I have been playing with some of the figures in the Office for Budget Responsibility's forecasts this morning. The following is table 4.24 on welfare spending, simplified to take out on some sub-headings and with all the data after the Total Welfare line added by me (although the nominal GDP forecast comes straight from the OBR): 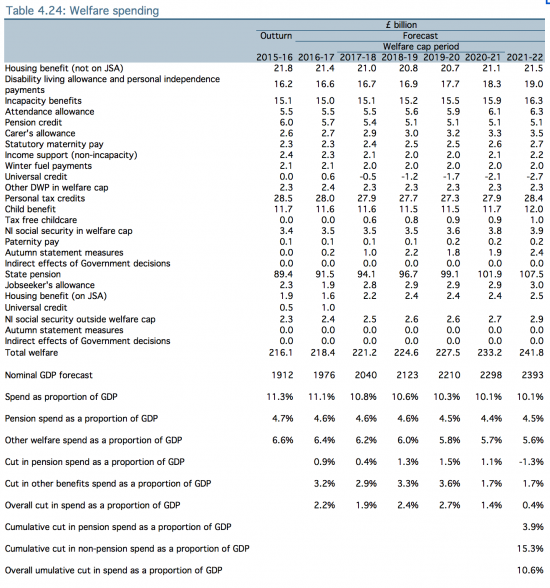 There are three reasons for reproducing this table. The first is to show what so called welfare spending is really on. Spot, for example, the tiny cost of those on Jobseeker's Allowance.

Second, I wanted to show that as a proprtion of GDP the spend on welfare will be falling over the next few years.

Third, I wanted to show the remarkable trends within that decline.

So, note that pension spending as a proportion of GDP will be falling. The decline will not be massive but it is panned to be real nonetheless. Many defend this because pensioners have done well over the last few years and the argument goes that others should now benefits instead.

But the fact is that they don't. Overall 6.% of GDP is spend on other benefits now and by 2021-22 that is planned to fall to 5.6% of GDP. What that means is that in real terms there will be a decline of 15.3% in the spending that would have taken place if the spend on benefits had been held constant as a proprtion of GDP over this period. And that is a staggering decline in the sum that will be dedicated to those who most need help in this country.