Much to my surprise I noted that the FTSE 100 was recording a level of nearly 6,300 yesterday: 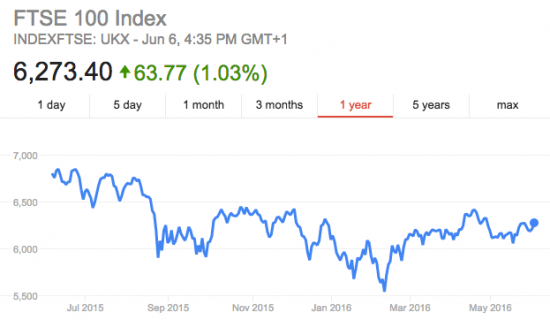 Many will recall that earlier this year, when markets seemed dedicated to exploring new lows on a near daily basis I thought we were heading for an early economic crash. I was far from alone, but it seems that paradise lost has been postponed. I was wrong, and I admit it. I accept that. Forecasting economics is nigh on impossible.

But I will take the risk again. Last week the US delivered much worse employment data than expected: this week the expectation that the Fed will raise rates seems to be disappearing.

Germany has passed a new milestone: its government debt in aggregate now has negative interest rates.

And the UK (and markets as a whole) face turmoil if there is Brexit. The uncertainty about the future of the government will make things tough even if we Remain.

In between all that there has been no real change of policy on austerity anywhere.

And Greece remains a finely balanced disaster still waiting to finally tip over.

It may not be crash time, yet.

But I see no reason for optimism either. And I won't until policy changes.