Was it really appropriate to give BHS £103 million for its tax losses?

Many years ago I took some interest in the affairs of Sir Philip Green. The failure of BHS has led me to do so again. There are a number of important issues that its accounts suggest, but let's stick to tax right now.

BHS was acquired by the Green family in May 2000 and has since 2004 been owned by the Arcadia Group, ultimately owned by a company called Taveta Investments Limited for the benefit of Lady Green and her family. She is tax resident in Monaco.

This is the trading history of the group, in summary, drawn from its accounts: 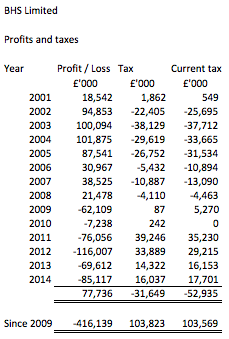 So, a question: should the group have been able to enjoy £103 million of tax subsidies for its losses because other companies in the Arcadia Group were presumably able to offset these against liabilities owing?

Is there good reason why the state should support continually loss making companies in this way?

Is a time limit on the number of years during which losses will be supported appropriate?

Would this sum have been better used helping clear the pension deficit?

I think these are appropriate questions to ask.