Tomorrow will see the onset of austerity stress

This chart comes from the paper I have written with Ronen Palan and published by City University Political Economy Research Centre: 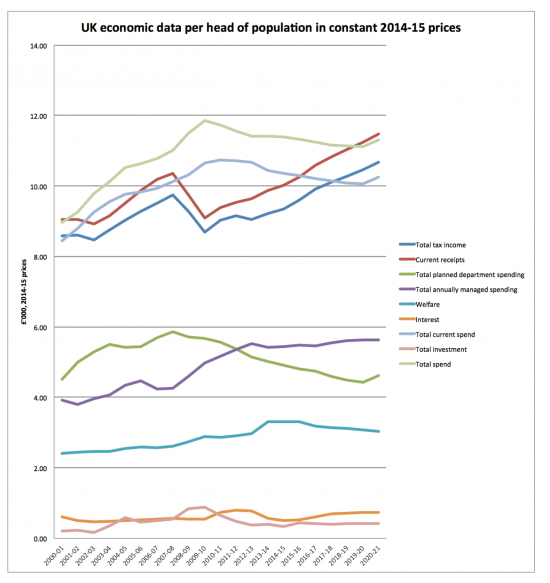 The data sources are HM Treasury budgets from 2000 onwards and the OBR forecast in July.

The chart was designed to impart quite a lot of information, all of it stated on a per capita basis in constant prices to show the impact of government actions at a macro level on individuals in the UK and how they are forecast to change.

This data suggests to me that there will be considerable 'austerity stress' as a result of the government's plans to implement the OBR forecasts, the details of which will be fleshed out tomorrow. Let me run through what those stresses will be.

First, and most obviously, government income per head of population is forecast to rise dramatically. From £10,020 in 2014/15 to £11,470 a head in 2020/21, this is a 14.5% increase over the period. Almost all of this is forecast to come from above inflation growth in income tax and national insurance. Corporation tax will fall, and VAT will be broadly neutral. I stress, I have also checked the data against forecast GDP growth: that shows the same trends. The result is that a lot of people are going to have to be paying a lot more tax to make this plan work. That means there are going to be a lot of quite stressed people in the UK paying record levels of tax per head, on average.

Second, at the time this is happening government spending per head will be falling. The particular issue here is to be found in the green and purple lines in the middle of the graph. These represent the two major components of government spend. The green line is technically called RDEL, which is the spend allocated by government to departments like health, education, law and order, defence, transport and so on. This is planned spending and is all the stuff that government does that makes us feel good.

The purple line is AME - or annually managed expenditure. This covers what the government calls welfare, debt interest and other spends that it thinks are largely beyond its control and which arise because of the economic circumstances of the time.

What is important is the different trends in the trajectories of these two sets of data. RDEL - the feel good stuff - rose under the Labour government - and was paid for by tax increases that covered current spending (near enough) but no investment (broadly speaking) until 2008.  AME also rose under Labour but not by nearly so much: the economy did not demand it.

Then the banks crashed in 2008 and the trends change.

This is important. The populace has been taught to hate AME. And it does. But the trend remains upward, nonetheless. At the same time, taxes will be increasing and the government feel-good factor will be vapourising as planned spending on all the things we want disappears.

Does this matter? I think so, for several reasons.

First, the expected tax increases are not talked about. I presume they come from expected growth, with a belief that yields will rise by more than that growth as the nation's army of self employed finally become aggregate tax payers. I do not see that happening.  That is one of the principle reasons why I think this plan will fail: austerity cannot deliver a balanced budget for Osborne because come what may cuts reduce GDP by more than the reduction in government spending (i.e. the fiscal multiplier is more than 1) and Osborne has always, and incorrectly, and without evidence base assumed otherwise. This plan is doomed from the outset then because the growth that, I think, underpins this assumed growth in tax income is simply not going to arise.

But as that realisation dawns - as month after month and year after year deficit reduction targets are not met (as they were not in October and will not be this year) - the real stress of seeing cherished public services disappear will increase. And at the same time stress about welfare, interest and other budgets will rise and yet more draconian cuts in benefits will be proposed in an effort to make books balance.

The result will be a massive austerity stress. The government will feel it as panic creeps through its ranks: failure this time can only be George Osborne's fault and powerful men struggling for political survival are not good for the country.

Worse though, the stress will be felt right across the UK. And that will be evidenced in increasing social disruption. Doctors on strike and the need for the Lords to rebel against constitutional niceties are just the first signs of this: stress as services are reduced to scales that we know are unnecessary and which are way below the level we know that we as a society can afford to deliver will result in backlash, especially as more tax is expected, whilst stress around social security and the well being of those who need such payments will rise, considerably.

There will be attempts to direct some of that stress into conflict within society, I suspect. That would suit the government's purpose. But I think ultimately that will be unsustainable because it will become apparent that austerity is simply not delivering. At some point over the next two or three years stress will reach the point where backlash against a government failing because of austerity will grow considerably.

I just hope opposition parties have something useful to say at the time, because if not the vacuum, will become very nasty indeed.

Welcome to austerity stress. And begin to get used to it. It is going to be a part of life.