Larry Elliott argues in the Guardian this morning that:

Jeremy Corbyn is right to blame the banks, not Labour, for the financial crisis

While other candidates apologise for spending and borrowing too much, Corbynâ€™s take on austerity and partyâ€™s economic record adds up.

I agree, and have always agreed that the claim that labour caused the crisis is absurd: for it to have been true Labour would, for example, have needed to have been responsible for the US economy where the crisis began and it very clearly was not.

The evidence that Larry (who I should ad, I know) uses comes from a House of Commons library note that contains these three graphs: 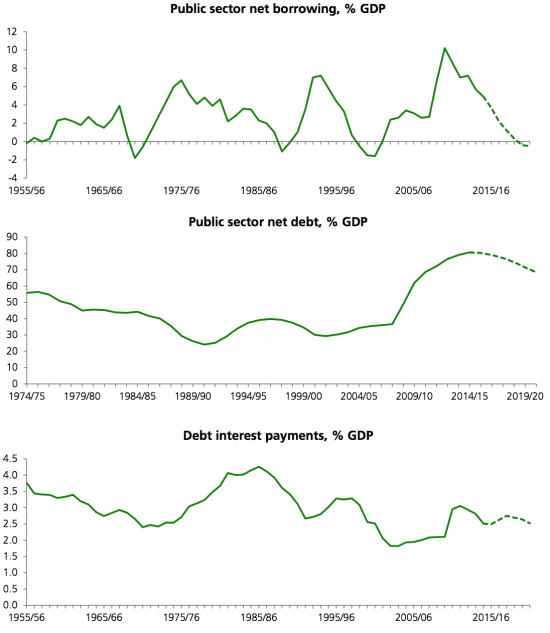 The graphs show three things. The first is that in interest terms Labour delivered new low levels of interest cost until US banks collapsed.

Second, they show that public sector net debt was also at a low rates under Labour until US banks collapsed.

And, third, that public sector net borrowing was especially low, and better under Labour than under the 1979 to 1997 era.

In other words, Labour could not have in any way caused a crash by overspending because, quite simply, it did not do so.

You can argue whether Labour caused banks to crash. I do not think it entirely innocent on this but raise four points.

First, the failure was in the US in the first instance: no one disputes that.

Third, those demands came most especially from Opposition benches.

Fourth, the banking failure in the UK would not have been prevented if Labour had adopted a different policy: the risks were not understood at the time by supposedly clever economists and was as a result systemic and not national.

The conclusion is that for seven years the UK's economic narrative should not have been focussed on government spending as the cause of what went wrong. That's because that was not the case. It should instead have focused on recovery, which is exactly what has been deliberately denied to the UK economy. I am a very long way from being the only person to argue this, of course.

Jeremy Corbyn happens to have made that point. It is a shame others in labour have not, from 2009 onwards. This country would have been vastly better off if they had.