The UK’s councils are creaking under the pressure of cuts

This is from the FT this morning (yes, the FT): 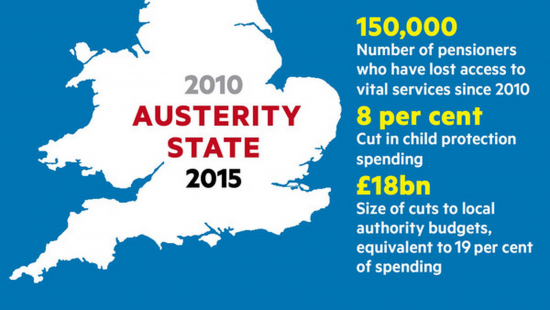 As they put it in their analysis of how bad things have got with local authority services:

The FT’s analysis shows the extent to which statutory services are already under pressure. Children’s social work departments, faced with a surge in referrals after public awareness was raised through a series of abuse scandals, have seen their funds cut by the equivalent of more than £600 for every referred child.

By 2014, some 150,000 elderly disabled people – who five years ago would have received help with washing and dressing – no longer qualified as councils tightened eligibility criteria to help only those with the most severe needs.

Their prediction is things will get much worse: many more cuts are being demanded.

In the sixth richest nation on earth we are refusing to look after the vulnerable. As definitions of moral bankruptcy little comes higher than that.