The fur is starting to fly in Jersey

I liked this comment by a long time pillar of the Jersey business establishment John Boothman in the Jersey Evening Post yesterday (sorry, ca;'t find it on line): 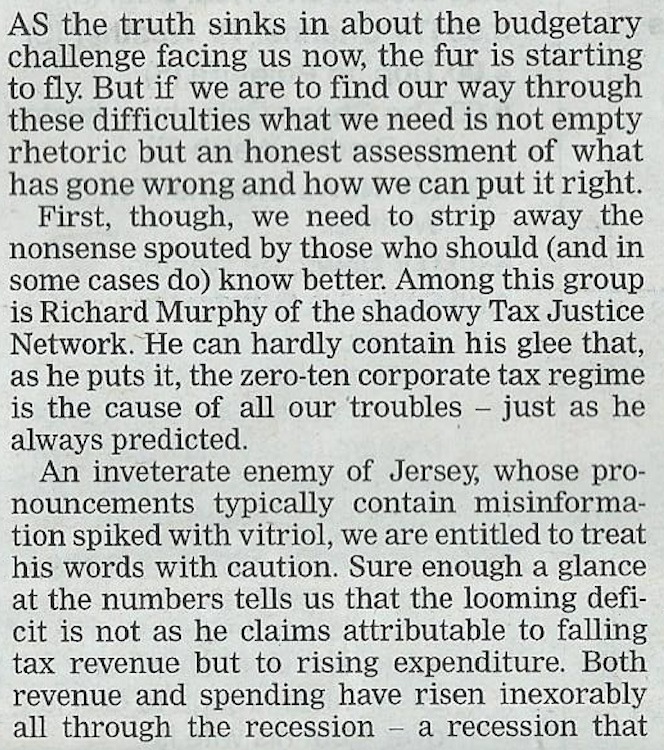 Mr Boothman has never  been my biggest fan,  but this is a little ridiculous.  First, if Mr Boothman bothered to undertake any research he would know that I have not spoken for the  Tax Justice Network since 2009.  Second, he would know that far from being shady, the Tax Justice Network publishes its full accounts, online, and discloses all its source of funding. I also make clear who funds my work.  The last thing we are is shady, but ad hominems were ever the resort of the desperate man.

And Mr Boothman's arguments are  desperate. First he argues that there is no room to tax the better off in Jersey more than at present. Perhaps with a lot more justification than the UK, he is worried that if that were to happen than those with any worth would leave the island, but in that case he should reflect on what this says about the fickle nature of their loyalty to Jersey, and the baseness of the corruption that has brought the island to this sorry situation. He does, of course, fail to do so.

Then he  says that, as a consequence, the only way for Jersey to solve its financial problems is to cut its spending, despite noting that every previous attempt (and there have been many) to achieve this goal has failed.  He should, perhaps, have noted that the same is true of the UK, where all such attempts only constrain growth, and rarely deliver actual cuts.

What he does not do in the light of this evidence is ask why this is the case. It is, instead, his presumption that it is down to civil service management failure in Jersey.  He obviously subscribes to the view that every civil servant is an empire builder, which is indisputably true of Geoff Cook at Jersey Finance but may be hard to justify elsewhere.

Or support for the vulnerable?

Or support for the finance industry?

Saying  hard decisions have to be made is one thing. Failing to note what the consequences might be is another, but that is exactly what Mr Boothman does. That's what I call shady. It's time the likes of Mr Boothman were held to account.