This exchange from Hansard a couple of days ago is interesting:

Kelvin Hopkins(Luton North) (Lab): The Treasury’s problems are, above all, about income, not expenditure. There is a gap of £120 billion a year between the tax that should be paid and the tax that is actually paid. However, the Government have presided over tens of thousands of job cuts in Her Majesty’s Revenue and Customs, where senior staff collect 20 times their own salaries and junior staff 10 times theirs. Are the Government not shooting themselves in the foot?

Mr Maude: The hon. Gentleman is completely mistaken if he believes that there is a direct linear relationship between the number of HMRC officials and the amount of tax that is being collected. There is absolutely no evidence of that. The size of HMRC, in terms of headcount, was falling before the 2010 election, and the amount of tax being collected has risen. We can do things differently and we can do things better–we have already shown that that is the case–but if the hon. Gentleman thinks that the only problem with the public finances is that we are not taxing enough and not raising enough taxes, I am afraid that he and I differ. I think that we must cut our costs first, which is what we are doing and will continue to do.

Francis Maude is simply wrong. Of course no one assumes that there is a precise linear link between the number of staff at HMRC and the amount of tax collected. It is impossible to say that each person completely and precisely collects a fixed sum as a result of their work and I know Kelvin Hopkins far to well to think he was implying that - because he was not. Such relationships of precision do not exist.

But this relationship does exist: 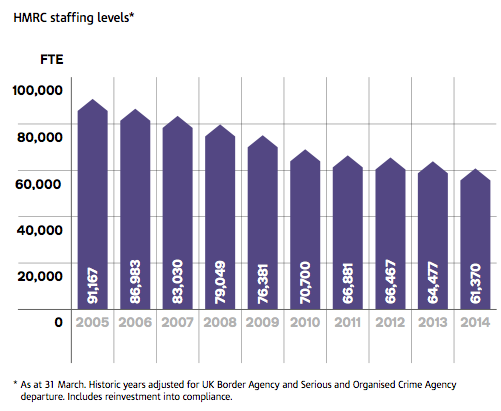 At least 5,000 staff in personal tax have left HMRC prepared the above table, and many more departures are planned.

I accept there is not a precise link between an individual and tax collected.

But I do think that shortage of people is the very obvious explanation of, for example, the dramatic decline in the number of requests for data from overseas tax authorities to chase tax abuse by UK resident people on which I have also commented this morning. And that decline will reduce the amount of tax recovered by HMRC, inevitably.

In which case Maude is not just wrong; he is not even remotely near to telling the truth.