A tax vision for 2015 and beyond – the practicalities

I have  already written about  the way in which I think the tax debate will develop from 2015 onwards, as the OECD BEPS process is completed. I doing so I have split my comments in two: the first part dealt with the vision i.e. the broad strategic direction in which I think tax debate will progress.  This second part addresses the more practical issues which will arise from current debate and which will need to be addressed over the next few years as BEPS and related issues turn from theory and recommendation into what, I hope, will be practice.

I think is important to stress how important these practical issues are. It has to be remembered that the whole BEPS process, and the changes that have led to  automatic information exchange and the disclosure of beneficial ownership,  are, today, only represented at best by commitments, draft regulations and potential legislation: the reality is that this whole process has had very little impact at all, as yet, in the practice of taxation  even if (and I think this likely) it is already having impact on tax behaviour both amongst large corporations and those using tax havens.  In that case to consider what actually needs to be done at a practical level is vital if real progress in tax practice is to be made. In saying that I stress it, I am not proposing to repeat here what I think BEPS will say: I am concerned with how whatever is said might be put to work.

Perhaps the first, and most important point, is to stress just how important it is that  tax authorities have the resources that they need to implement the BEPS process and to use the data that  automatic information exchange and other data sources supplies. At present this is unlikely, and not just in the UK. This is from a US story on cuts to IRS funding and the related tax gap data: 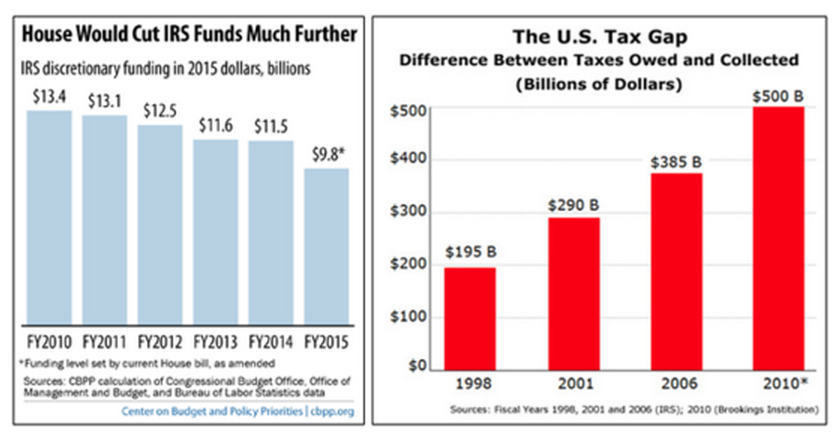 The UK story is little better. This data comes from the HMRC business plan 2014-16: 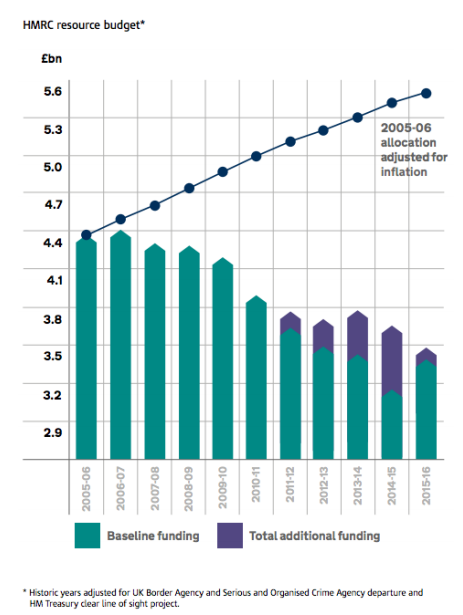 HMRC is being starved of funding in the UK. The very real chance exists that nothing will happen as a result of all the opportunities that BEPS, automatic information exchange, and the like create because there will be no staff to use the data that they supply. Nothing may be more important than this in tax debate over the next few years.

So, after that what is important? First, legislating BEPS is. Unless BEPS turns into local law all the progress at the OECD will be meaningless.

Then training people to use BEPS will be vital. So, for example, having country-by-country reporting data will be useless if people do not know how to use it and I have already found in discussion with tax people that they have little clue as to the issues that will be hidden within, and will need to be unravelled from the BEPS template. There will be a lot of work to do here.

That will also be true of developing countries. Aid for tax authorities pays very good returns for donors but it has to be properly planned. So the right laws have to be out in place, and then tax offices need o have long term plans and funding so the right physical resources are available (IT and power, for example). Then (but only then) training is key - but so is good pay if all this is not to be a subsidy to the Big 4 in developing countries. Post 2015 development needs to get this right.

And developing countries will need to be careful about how they use BEPS: arm's length pricing still poses major problems for them and they need to look at how other arrangements can support their tax base. Profit splitting arrangements which approximate to a unitary tax base are a key tool for them to develop, collectively and proactively. They need to establish how to get the accounting data to work this out.

General anti-avoidance principles are key to the next few years. Much of BEPS seeks to identify the split between the substance and form of tax transactions. When the two are split mechanisms to challenge the arrangements are needed (Osborne's Diverted Profits Tax is a poor example of this). General anti-avoidance principles, unlike the UK's useless General Anti-Abuse Rule, could tackle these abuses internationally. International co-ordination will be key. So too will be learning how to use such arrangements and to share information on them to ensure desired outcomes are achieved. There will be steep learning curves here,

Making automatic information exchange from tax havens work, and learning how to filter data to match it with tax returns and so raise cost effective enquiries will also be vital. There are billions to be won. Will the investment to get it be made? And will the investment to encourage voluntary compliance occur? Only with appropriate effort is the one thing that can be said.

None of the automatic information exchange systems will, however, work without rules on beneficial ownership being enforced. To be polite, the UK runs an appalling company registry and has no register of trusts at all to speak of. Our new rules on disclosure of beneficial ownership arrangements are a voluntary disclosure box arrangement and toothless when around 400,000 companies a year fail completely to disclose who their shareholders are. Unless the UK transforms the work and role of Companies House we cannot lead the way in making automatic information exchange work. If we want fig leaves that is what we will get. Real investment in Companies House would produce a massive tax yield in the UK and establish an international benchmark. Will it happen? I won't be holding my breath but know it is essential.

What else are the big issues? Tax authorities need to be well governed and sell their riles positively. The UK is a long way from that.

Corporate governance needs to embrace tax, as does the CSR community, and both are a million miles from it, largely du to the influence of the Big 4 accountants, I think.

That simply emphasises that the tax profession needs to be better regulated. especially at the high end. If the Big 4 persist in woking in tax havens they have to be excluded from all public contracts, in my view.

More generally, the UK and EU need to link tax and procurement much more heavily. The Fair Tax Mark principles have a role to play here. Black lists are hard to create: white lists work.

And then we get to the nitty gritty in the UK. Things like tackling inequality because we tax labour more heavily than capital, which requires that we have an investment income surcharge again. And that we have a regressive council tax that needs replacement with land value taxation. And we need to raise corporation tax rates from their current absurd level. And to create a working inheritance tax and have capital gains tax rates in line with income tax. We also need to reduce VAT, but tax carbon usage more whilst giving more breaks for alternative energy. And we need to develop a logical basis for devolving tax power when right now some of the most inappropriate taxes are being devolved for all the wrong reasons.

There is much to do.

The tax agenda is ongoing and social justice has to be at the heart of it or we all lose out. And that we cannot afford.