I've now read the proposed legislation that will create the Diverted Profits Tax, which is here for those with the willpower to go through it.

Let me offer a first summary of this tax.

First, this reads as if it is a giant targeted anti-avoidance provision whose aim is to bring within the scope of UK tax profits that are not presently chargeable because a foreign company has taken steps to avoid creating a permanent establishment for its UK sales.

Second, this only applies to larger companies. The foreign company must have UK sales of at least £10 million and if the UK activity would be considered a small or medium sized company for UK accounting purposes this new law does not apply. It also does not apply to one off transactions and it seems likely (although I have not checked in detail as yet) as though many financing arrangements will be outside the scope of the arrangement.

Third, the tax looks to see if either UK costs have been inflated or UK sales have been reduced such that there is a tax mismatch between what seems likely should actually reported in the UK and what is reported in a foreign company. The concept of mismatch is key.

Section six of the new legislation says how the diverted tax is calculated: 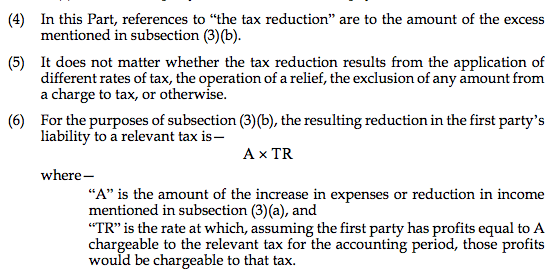 The tax reduction mentioned in section 3(b) is the amount  of reduction in UK tax compared to any increase in foreign tax due as a result of the diversion. This has to be 20% of the UK tax that might have been due for the charge to apply. Losses and some other issues are ignored when estimating foreign tax due.

So, in summary (and there is a lot more that could be said) the UK is introducing a law here that will bring within the scope of UK tax profits that it claims have been diverted from the UK by avoiding creating a permanent establishment in this country. This targets Google, Amazon, Apple, Facebook and others, quite explicitly. Almost all companies likely to be impacted are US owned. Phone lines to DC will be very hot today.

Second, this only applies to large companies, which is logical.

Third, the test does not challenge the right to incorporate in another country. I think that is clear. What it does challenge is the right to avoid tax by doing so. That is a fine distinction and will, I suspect be the subject to years of litigation under EU law.

Next, will it work? It may for the time being: a right to collect estimated tax is included in the law and so recovery will take place. Bit will it stick under legal challenge? I really do not know. There are real problems in EU law with this. I would like it to do so, but I cannot be confident. All the reservations I had under EU law remain in the draft I have read.

Last, do I welcome it? Not unambiguously, no. First, this is heavily targeted and as Luxleaks shows abuse is much wider than this. This is a useful move, maybe, but very narrow in its focus. The omission of financing arrangements looks serious to me, and undermines much of the effectiveness if my interpretation that this is the case is correct. And a host of other problems, such as transfer mispricing are untouched, where an absence of resources is the issue. Which brings me to a key issue, which is whether HMRC will even have the capacity to enforce such a tax. But perhaps, most of all, I have reservations on the impact on the BEPS process. I will be preparing a separate blog on that for Economia magazine, which I will link to soon.