I commented on the referendum in Scotland and so will comment on its aftermath despite the fact that I am not, of course, anywhere near Scotland.

There seem to me to be three key issues. The first is that the election has galvanised Scottish politics. By membership the SNP is the third largest UK political party and the Scottish Greens are doing well too whilst the Conservatives remain non-entities in Scotland and the Lib Dems there are sharing their UK wide prospect of a political abyss. In contrast to the SNP Labour has collapsed into intercinine quibbling, is having one of the leadership elections it always handles so badly and which always seem to be outright gifts to its opponents, and is suffering a potential political collapse which could help, yet again, change the face of UK politics.

The Independent put the latest opinion poll predictions like this when compared with the 2010 election outcome: 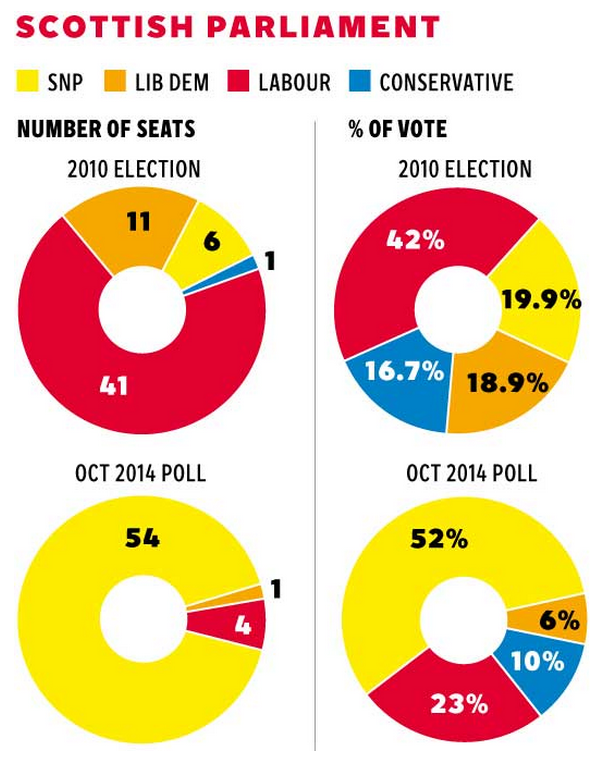 That is a staggering suggestion, and we are seven months from the 2015 election.The chance that this will change dramatically by then is now low. Scotland is angry with Labour, who the Scottish electorate thinks sold it a deliberate misrepresentation engineered by Cameron and the Tories in the referendum as a result of which failure by Labour Scotland will now unambiguously take second place in the Union and will lose out as a result. The Scots are willing to punish Labour as a result.

I am unsurprised. Many, I think, voted No with clothes pegs in their noses. Now they can smell the stench of the neoliberal conspiracy that has exposed its true colours to them. In the aftermath of that fact and Labour's obvious inability to work out what was really happening in the Conservative campaign of which they were a part Labour is being punished, and rightly so.

The SNP reacted to its loss by moving left and by choosing a new and impressive leader, not that I suspect Alex Salmond will leave the scene. Indeed, expect him back in Westminster next year, I suggest.

Labour has in contrast been recriminatory and is moving right when it is very clear Scotland has no time for that at all. Jim Murphy is considered the leading contender to be its new leader. He has no Holyrood seat and on current opinion poll ratings little chance of getting one. But the real issue is that as a right wing, Blairite neoliberal wedded to austerity and without proven flair in any ministerial position he has ever held Jim Murphy is hardly the man for the moment. His unpreparedness and lack of awareness are all too apparent from his comments reported in the Guardian today where it is noted that he said:

I want to end that period of losing Labour here in Scotland, starting with the UK general election in 2015, where I’m confident we can hold all the seats we currently have but pick up one or two on top, and also win that election in 2016 for the Scottish parliament.

Heaven help Labour then. Being led by a man who can say that sort of thing will be like being the proverbial lamb on the way to slaughter.

First that's because Jim Murphy does very much care about left and right Labour. He has been closely associated with Progress, which has been the torch bearer for Blairism ever since the man departed the scene. Being right-wing Labour matters very much to him indeed.

But much more damning is the claim that all he really cares about is Labour winning. The people of Scotland suspected Labour took them for granted for a long time. Now they won't endure that again. Being simply treated by a new Labour leader as Westminster fodder, as this comment implies, would be enough to annoy me intensely.

No wonder the Labour vote in Scotland has collapsed. And with it goes any chance of a UK Labour government. Scotland will have its comeuppance in 2015 if this anger persists, and in a now deeply politicised society I can't see that anger dissipating.

This does not mean we get a Conservative government, of course. They and the Lib Dems might also lose from this, and the result is no one could rule Westminster without explicit Scottish support. That takes us back to the Irish position of the late nineteenth century, which is almost forgotten. What it guarantees is awkward coalition or minority government.

But it does more, because it sends a signal to Labour that it is refusing to listen to. People are fed up with right-wing, neoliberal Labour. Labour may not have noticed but its chance of being elected on being Tory-lite are fading fast because that denies anyone hope to most people, and if there is a core product at the heart of politics then hope is it. Labour has almost no way it seems capable of finding that hope within itself, let alone of tapping it to sell to the electorate now.

The chance that Labour will remain relevant in debate for much longer seems low as a consequence and the political remapping of Britain, to match the UKIP split on the right, seems ever more likely. I have never felt the end of two party politics more likely, but we are quite unprepared for the the consequences.