The shrinking UK is a Cowardly State

I was curious to note a couple of adjacent headlines in an email from the FT, received this morning. They looked like this: 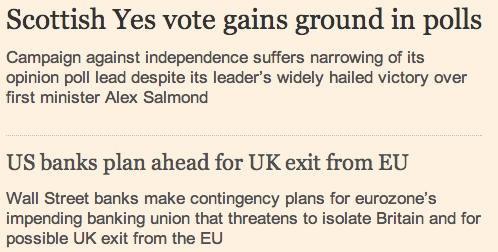 Three years ago I wrote The Courageous State in which I described the current state of politics in the UK as The Cowardly State. We had, I argued, governments who ran away from their responsibilities. Now we have headlines making clear that this is what people think the UK is doing.

The confidence of the Scots to challenge for independence is at least in pat based on a lack of confidence in what the UK has to offer and a belief that they can build a better country for themselves.

And the UK so lacks confidence in itself it wants to run away from Europe. What is extraordinary about the whole EU exit lobby is not its positive vision - because it is hard to find one, but its negativity.

All these factors are in their own way measures of the impact of the thinking of the Cowardly State. A great many Scots want what they have always wanted - a more Courageous State. Banks think the UK has lost vision. The EU exit is a sign of politicians without vision only able to sell the idea of a negative narrative.

Why the lack of confidence. I'd have to suggest, in part, you need to read the book to explore that issue. But there are other clues in the morning press. The average gap between the pay of the top earners in FTSE companies and the average pay of their staff has increased to a ratio of 1:143. That, of course, means that in many cases it is very much higher. WPP and Next, both with top earners closely associated with the current government, are vases where the gap is much higher. And as the FT notes in an article this morning, people in the UK have a much better than average perception of what the real income distribution in the UK is than do people in, say, Germany, France and the USA. We know as a result that we are being exploited and that there is an elite that is using the current policy of the government as a mechanism for personal enrichment and that the government is complicit in this process. No wonder there is disenchantment.

What is so odd is that there is no strong countervailing political narrative being offered - barring the Greens - that seeks to embrace this disenchantment. And that too is a reason for people's negativity and disengagement with the process itself. All of which is deeply depressing for a Monday morning.