The impact of the 50% tax rate will be smaller than the withdrawal of child credit at Â£60,000 for most who will pay it

The 50p tax rate debate will take headlines for a day or two. I think that's deliberate and even desired by Labour: the current leadership has always sought a popular tax announcement at the Fabian conference to cover for the economic policy announcements Ed Balls makes at the same time, which has almost always been unacceptable to most in Labour.

I think the 50p tax rate is important. I think, contrary to what the IFS says and what the Treasury says that it will raise money. I say that because most of those who are working for both those bodies are economists with little idea of how tax actually works in reality. And I think Labour is right to say it did raise money. But it's more than that; as I argued here it's important for the debate on equality and for actually tackling inequality - which even the IMF says is a major threat to world economic stability.

So there are excellent reasons for having a 50p tax rate. But let's also have some facts to counter the nonsense that will be spoken on this issue. This table comes from HMRC and is their latest estimate of the current year tax take: 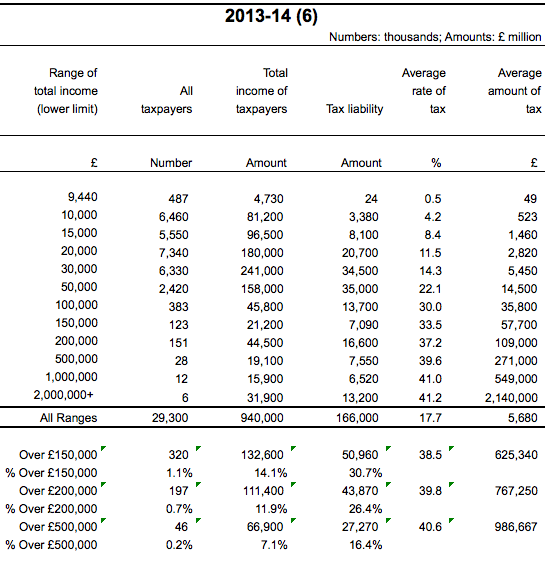 I would stress, I added the last six lines.

What's important to note is that no one pays tax at 45% at present. Average tax rates just creep over 40% on average for even the highest paid.

Those highest paid settle between them just over 30% of all tax, but enjoy between them 14.1% of all income even though those earning over £150,000 are just 1.1% of all tax payers. They pay more because they can afford to pay more.

And simple linear extrapolation would suggest that additional tax due by increasing the marginal tax rate by 5% might add a little over £5 billion to the tax take.

Now of course there will be a little planing in year one. But over time that's the likely outcome. I call that income worth having when a deficit needs cutting.

But let's also look at this in context, considering just those in the bracket £150,000 to £200,000 (the supposed middle class who are hit if the Daily Mail is to be believed that these people really are in the middle class and assuming that even they believe that some who pay tax at this rate have to be wealthy). For these people the maximum additional tax take will be 5% additional tax on their income over £150,000. That is a maximum of £2,500. On average a figure of £1,250 or less is, of course, much more likely in this band since incomes will be weighted to the bottom end of it.

Now let's consider the impact of a Coalition tax change that did not attract letters to the Telegraph from business leaders about its massive likely effect on the state of incentives in the British economy. This is the withdrawal of Child Benefit for those earning over £60,000 a year; a figure many more Mail readers are likely to aspire too. For a Mail reader with three children this increased their tax bill by £1,929 a year.

Now, which one is likely to have a bigger disincentive effect?

In fact, it is only when someone earns £400,000 a year that the proportionate effect of the 50% tax rate will be bigger than the withdrawal of child benefit for three children from people earning £60,000 a year. And the vast majority of those paying 50% tax will earn less than £400,000.

So why then all the fuss?