Who inherits in the UK?

The Office for National Statistics published a survey on inheritance in the UK for the years 2008 to 2010 yesterday. It's a telling report. As they note:

The percentage of adults receiving an inheritance valued at £1,000 or more in the two year period was 3.6% - or 1.6 million adults.

Knowing how many individuals inherited as well as the value of the assets received is important. Certain inheritances might carry a strong emotional attachment. However, if inheritances are of little financial value they are unlikely to influence an individual’s economic wellbeing or subsequent life choices. For example, inheritances of higher monetary value might permit recipients to pay off their mortgage, help children onto the property ladder or fund their university fees.

A tenth of inheriting individuals received no more than £1,000. Half of inheritors received less than £10,000 — but a tenth received an inheritance valued at £125,000 or more.

The combined total of all inheritances received over the two year period was estimated at £75.0 billion.

However, such a figure does not tell the whole story:

The inheritances received by a small few had a disproportionately higher value than the majority. Figure 1 illustrates that the sum received by one fifth of inheritors totalled £57.0 billion. This accounts for over three-quarters of the overall amount of inheritance received during the two year period.

This is that table: 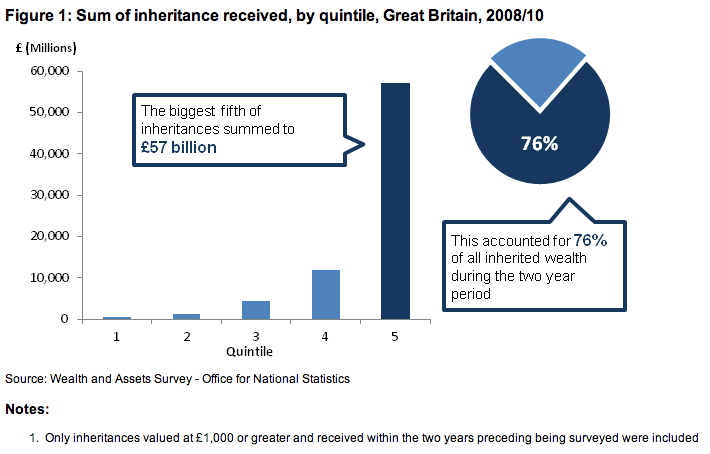 What is abundantly clear is that, as we well know, the distribution of the benefit of wealth is deeply unequal.

It's important when seeking to understand this to know what is inherited. This table indicates that: 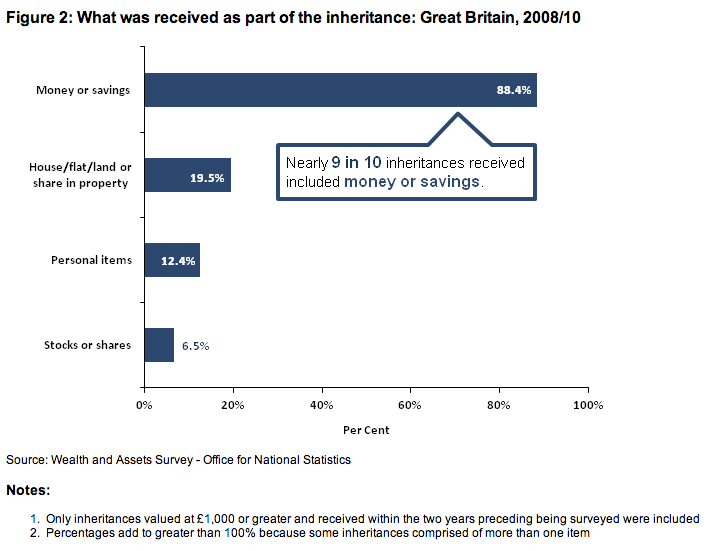 What this immediately makes clear is that the 'family home' argument on inheritance is not nearly so significant as many make out. It's important - but not that important when all maters are considered, especially when, as is likely to be the case, many such properties are either sold after receipt or are let out and never lived in.
And what influences the likelihood of inheriting? The ONS say:

Characteristics associated with an increased likelihood of inheriting included:

Characteristics associated with a decreased likelihood of inheriting included:

In other words, inheritance appears to very strongly reinforce patterns of inequality in society, all of which lends strong support for improved wealth taxation in the UK.

We know unequal societies do not prosper as well as more equal ones. We know that as a result appropriate wealth taxation can positively contribute to overall well being.
Wealth taxation has to be on the UK agenda for reform. I look forward to seeing the political party who will take the issue on.
Donate
34