A crash was coming and my instincts were entirely right even though people did, of course, tell me I was wrong at the time.

But note - the FTSE is at record levels again. Now in earnings multiplier terms it is not, I know. They are around 12 to 13 now and were 17 back in 2008 and you could therefore argue things aren't comparable, but that attributes a logic to markets they just don't have. Remember, after all, that the FTSE equity market is a just a market in second hand bits of paper called shares: it has little at all to do with raising cash for businesses.

In 2008 I offered this explanation for what I saw as irrational:

There are three explanations:

1) The index is wrong (this is plausible — it is regularly revised to only include winners, so giving a false impression of what is really happening);

2) Institutional investors remain committed to stock markets because this is what they’ve always done and most young people in the City (those sub 40) know nothing else — which says nothing has been learned about herd effects as yet, despite the damage they have already caused;

3) We’ve set up an unsustainable savings structure for pensions and other purposes which means money has to be placed solely in derivative financial products (and even shares are that) and that there is no way funds can actually be used to invest in real economic activity — meaning financial markets are unrelated to that reality.

I suspect all three explanations are right, in part.

And I still do: we have learned nothing. Even the new state sponsored pension schemes are going to be (wholly inappropriately) equities based and we will all be paying the price for this again sometime soon. Indeed, this scheme, now being advertised on television, could provide the additional cash that will

Why am I so sure. Take a look at this longer term chart (from Money Week): 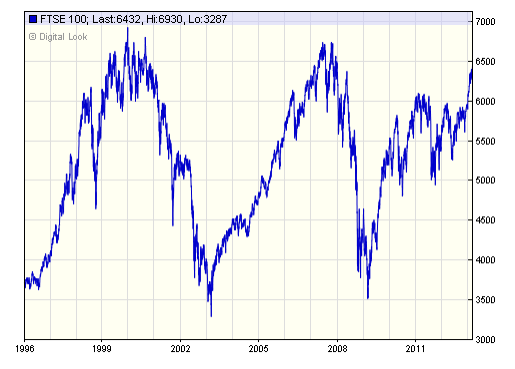 It doesn't take a genius to notice a pattern, does it?

Nor does it take a genius to realise that when we're facing triple dip recession in the UK, the EU is in deep trouble, the US is facing Republican lead melt down and Japan remains in the doldrums the buoyancy of the BRICS is not going to sustain this growth. We may have a year or so before a crash, but crash the market will.

Which is why what I wrote on pensions in 2003 and in 2010 continues to make sense. We have to invest pension funds in the assets that people want, can see and can ebenfit from and that deny the City the chance to fleece tose assets of value on the way. Those things are called schools, hospitals, transport infrastructure, housing and the green economy. These give rewards now and pay dividends until most people will be of retirement age - unlike most investment in equities or second hand shopping centres, which is the other great pension favourite, or even corporate bonds.

I'll just lay down a marker: I could be wrong, but I doubt it.