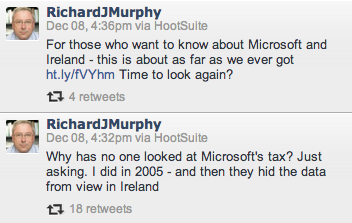 I did so because it seemed odd that no one had looked at Microsoft since I helped Glenn Simpson do so seven years ago - when it was the very first of these stories.

The Sunday Times did it today - I do not know whether as a consequence or not. They said:

MICROSOFT is channelling online payments for sales of its new Windows 8 operating system to Luxembourg as part of a scheme that avoids UK corporation tax on more than £1.7bn a year of revenue.

The Sunday Times has established that a small office in a Luxembourg business park with just six staff handles hundreds of millions of pounds from online Microsoft sales in the UK and the rest of Europe.

The bulk of the money is transferred to Microsoft’s European headquarters in Ireland. Profits can then be routed to Bermuda without UK corporation tax being paid.

Since that's behind a paywall here's the Mail's version, which suggested £159 million had been avoided (although I have to say I am not sure how they came to that figure which may, or may not therefore be correct and which feels to me to be rather high) [Please see comment made subsequent to first posting of this blog here: I have now published reason to doubt the accuracy of this number]:

Microsoft pays no tax on £1.7billion of online sales in the UK thanks to a legal loophole, it has been reported.

The technology monolith is funnelling cash generated by online sales of Windows 8 software to Luxembourg to sidestep tax obligations, according to The Sunday Times.

If the allegations are true the company will join a growing number of foreign companies coming under scrutiny for avoiding UK tax, such as Amazon, Apple and Google. Earlier this week coffee chain Starbucks caved to public fury and announced it would pay Her Majesty’s Revenue and Customs to pay £20million over the next two years.

Microsoft is avoiding tax on UK sales of its Windows 8 operating software, according to reports

Microsoft has its main European headquarters in Ireland, where the corporation tax rate is roughly half of that.

Richard Murphy, of the Tax Justice Network, a global tax watchdog and thinktank, said: 'Like many other companies, Microsoft is trying to avoid tax.

'It has tried hard to represent itself as doing the best thing for the world, but if you really want to solve the world's problems, pay taxes.

'£159million [if true] would more than pay for a hospital, or provide IT training for young people so they can work in that industry.

'They are withholding money from the people who need it.'

A spokesman from Microsoft said: 'Microsoft pays all due taxes, as required by law, worldwide. Microsoft subsidiaries are fully subject to tax in the jurisdictions in which we operate.

'We are regularly audited by major tax jurisdictions, which ensure the company is complying with all rules and regulations.'

Either way, it is time for the rules to change.