The growth in the UK’s inequality in one graph

I've been analysing some HMRC data this afternoon. The data in question is available here and shows the shares of total income (before and after tax) for percentile groups, 1999-00 to 2012-13. I've ignored the data after 2010 as it is estimated and looks hopelessly incorrect. I've also compensated for the fact that HMRC still can't work out what happened in 2008-09 yet by using an average for the year either side, which I think a fair statistical technique.

Having done this it wasn't hard to produce the following graph: 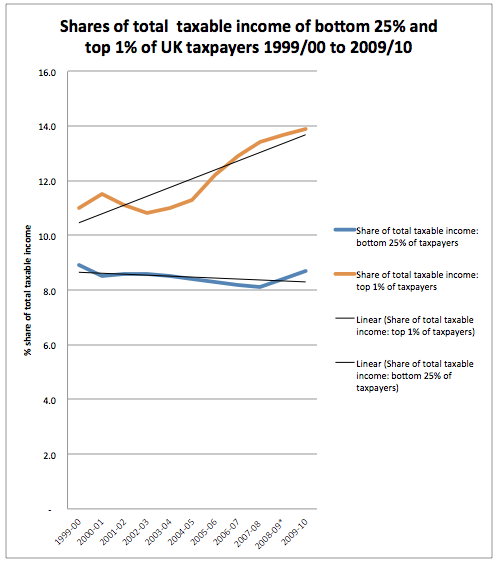 The blue line represents the share of total taxable income in this country that the bottom 25% of taxpayers owe. The kick in the last year or so looks impressive, but is flattered by the fact that the personal allowance rose considerably from £5,225 to £6,475 between 2007-08 and 2009-10 - meaning a fair number of people on low incomes fell out of tax, sending the average upwards.

There's no such explanation needed for the ochre line: that's the share of total taxable income paid to the top 1% of income earners in the UK.

I've put in linear trend lines just in case of doubt about what is going on. Not only do the top 1% have considerably more than the bottom 25% of income earners in the UK, their income share has grown considerably and that of the bottom 25% has fallen.

If you want a graph of inequality that's it.