We need a bias to the poor

I wrote yesterday about the need or redistribution in society.

When I wrote I was not aware that the Households Below Average Income (HBAI) survey for 2008/09 had just been published. The following comes from Chapter 2 on household income distributions: 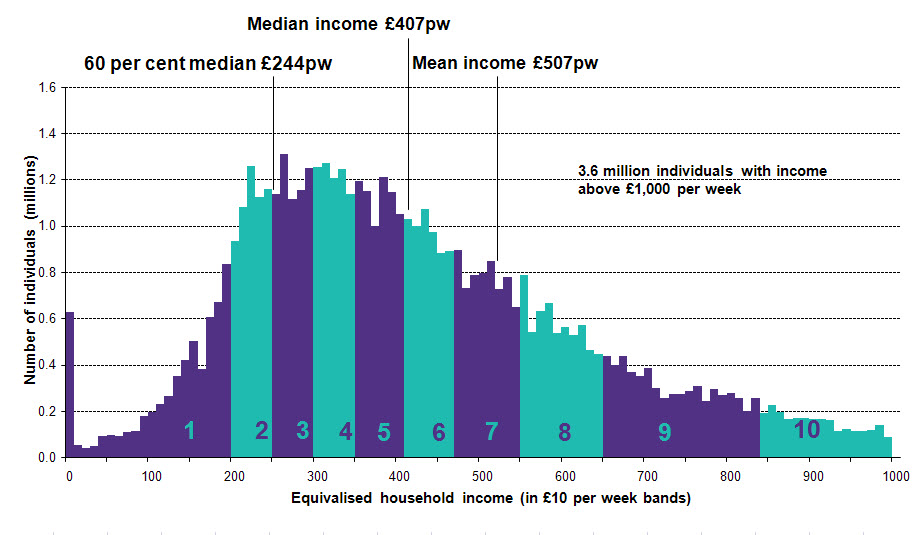 Let’s be clear, the absence of the 3.6 million people (not earners) living in households enjoying income of more than £52,000 a year after tax skew the data a little: I know that. But this graph covers 94% of all people living in the UK. And for these people median household income is £21,164 a year.

And just look at how the graph is skewed. Our society is built around a bias to the rich: it’s that 3.6 million to whom the whole of society is orientated.

I believe we need a new bias to the poor – incidentally the title of a book I recommend written by Bishop David Shepherd in the early 80s which annoyed Thatcher intensely – and all the better for it.

The rich – and yes, if you’re one of the 3.6 million you are rich – are able to look after themselves, by and large. My concern is for the rest. But that’s not true of most – and it’s certainly not true of the libertarian right.

I remember several years ago interviewing Alvin Rabushka – creator of the madness of flat taxes – and he said:

“The only thing that really matters in your country is those 5% of the people who create the jobs that the other 95% do. The truth of the matter is a poor person never gave anyone a job, and a poor person never created a company and a poor person never built a business and an ordinary working class guy never drove economic growth and expansion and it’s the top 5% to 10% who generate the growth for the other 90% who pay the taxes to support the 40% in government. So if you don’t feed them [i.e. the 5%] and nurture them and care for them at the end of the day over the long run you’ve got all these other people who have no aspiration for anything more than, you know, having a house and a car and going to the pub. It seems to me that’s not the way you want to run a country in the long run so I think that if the price is some readjustment and maybe some people in the middle in the short run pay a little more those people are going to find their children and their grandchildren will be much better off in the long run. The distributional issue is the one everyone worries about but I think it becomes the tail that wags the whole tax reform and economic dog. If all you’re going to do is worry about overnight winners and losers in a static view of life you’re going to consign yourself to a slow stagnation.”

That’s the callousness of the right. His idea is so brutal: let the middle and poor pay to support the rich. Note how his statistic happens to fit so neatly with the above graph.

Rabushka says none of these people matter.

I say they do.

That’s the difference between left and right.

That underpins what this blog is, in its UK context, about.