Tim Worstall – in his usual contemptuous style – had a go at Caroline Lucas’ promotion of a steady state, carbon neutral economy. Caroline, leader of the Green Party and a fellow author with me of the Green New Deal said in the Guardian:

But we must replace this with targeted investment in the energy efficiency and renewable energy infrastructure we so urgently need to enable us to make a swift transition to a steady-state, zero carbon economy.

I happen to agree with this.

Worstall (a climate change denier, or so it would appear – like so many of his type) said:

What is it about Greens that they refuse to read or understand the scientific consensus? The IPCC reports themselves?

In response I said on his blog:

Where’s the evidence of consensus we can grow 11 times, contain CO2 and do this whilst running out of oil?

There is none - it’s your fantasy

Your version is just contributing to disaster

Which opened the floodgates (I seriously wonder if Worstall has a life) and he demanded an apology from me in a blog (which is interesting behaviour from a libertarian, but we’ll leave that aside).

But for all his “references”, the emails he has sent and the further emails from his friends setting timescales for my response after which I would be deemed an idiot (which is an interesting debating method) Worstall does have a real problem. The fact is that his work is based on the work of the Intergovernmental Panel on Climate Change (a UN body) which last reported in 2007. there’s a good summary of its work here.

Now I’m not claiming to be an expert on its work, because I’m not. But I can say that its analysis is based on four economic scenarios. These were published in 2000 – the dark ages in these terms – and have not been updated since. These do indeed suggest growth of the scale Worstall quotes. The scenarios look like this: 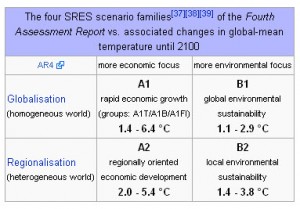 Now note that this is not the last word on the subject, although Worstall and his colleagues seem to think it is. There was a conference in Copenhagen in April this year that reviewed this data and produced a pretty comprehensive and authoritative update on the reports Wortsall likes. This is here. The home page is here. This is what the executive summary says:

Past societies have reacted when they understood that their own activities were causing deleterious environmental change by controlling or modifying the offending activities. The scientific evidence has now become overwhelming that human activities, especially the combustion of fossil fuels, are influencing the climate in ways that threaten the well-being and continued development of human society. If humanity is to learn from history and to limit these threats, the time has come for stronger control of the human activities that are changing the fundamental conditions for life on Earth.

To decide on effective control measures, an understanding of how human activities are changing the climate, and of the implications of unchecked climate change, needs to be widespread among world and national leaders, as well as in the public.

The purpose of this report is to provide, for a broad range of audiences, an update of the newest understanding of climate change caused by human activities, the social and environmental implications of this change, and the options available for society to respond to the challenges posed by climate change.

This understanding is communicated through six key messages:

Recent observations show that greenhouse gas emissions and many aspects of the climate are changing near the upper boundary of the IPCC range of projections. Many key climate indicators are already moving beyond the patterns of natural variability within which contemporary society and economy have developed and thrived. These indicators include global mean surface temperature, sea-level rise, global ocean temperature, Arctic sea ice extent, ocean acidification, and extreme climatic events. With unabated emissions, many trends in climate will likely accelerate, leading to an increasing risk of abrupt or irreversible climatic shifts.

The research community provides much information to support discussions on “dangerous climate change”. Recent observations show that societies and ecosystems are highly vulnerable to even modest levels of climate change, with poor nations and communities, ecosystem services and biodiversity particularly at risk. Temperature rises above 2oC will be difficult for contemporary societies to cope with, and are likely to cause major societal and environmental disruptions through the rest of the century and beyond.

Rapid, sustained, and effective mitigation based on coordinated global and regional action is required to avoid “dangerous climate change” regardless of how it is defined. Weaker targets for 2020 increase the risk of serious impacts, including the crossing of tipping points, and make the task of meeting 2050 targets more difficult and costly. Setting a credible long-term price for carbon and the adoption of policies that promote energy efficiency and low-carbon technologies are central to effective mitigation.

Climate change is having, and will have, strongly differential effects on people within and between countries and regions, on this generation and future generations, and on human societies and the natural world. An effective, well-funded adaptation safety net is required for those people least capable of coping with climate change impacts, and equitable mitigation strategies are needed to protect the poor and most vulnerable. Tackling climate change should be seen as integral to the broader goals of enhancing socioeconomic development and equity throughout the world.

Society already has many tools and approaches – economic, technological, behavioural, and managerial – to deal effectively with the climate change challenge. If these tools are not vigorously and widely implemented, adaptation to the unavoidable climate change and the societal transformation required to decarbonise economies will not be achieved. A wide range of benefits will flow from a concerted effort to achieve effective and rapid adaptation and mitigation. These include job growth in the sustainable energy sector; reductions in the health, social, economic and environmental costs of climate change; and the repair of ecosystems and revitalisation of ecosystem services.

If the societal transformation required to meet the climate change challenge is to be achieved, then a number of significant constraints must be overcome and critical opportunities seized. These include reducing inertia in social and economic systems; building on a growing public desire for governments to act on climate change; reducing activities that increase greenhouse gas emissions and reduce resilience (e.g. subsidies); and enabling the shifts from ineffective governance and weak institutions to innovative leadership in government, the private sector and civil society. Linking climate change with broader sustainable consumption and production concerns, human rights issues and democratic values is crucial for shifting societies towards more sustainable development pathways.

I added the highlights but they show:

a) That in all Worstall’s apparently feasible options the likely temperature rise is now above 2 degrees – which is unsustainable. This means that the option he promotes is not achievable – so justifying my comment that it is a fantasy to think that it is.

b) Appropriate targets for reduction have not been set – and the feasibility of meeting them has not been proven – so again his glib comments on this being possible are simply not appropriate – and the evidence of consensus is clearly not present, contrary to what Worstall says.

c) Changes in consumption are desirable – although, I agree, this is not the same as steady state.

The point of this is though that:

1) Worstall is wrong – his claim cannot be justified

3) Most worryingly – many Conservatives agree with people like Worstall on this issue – indeed it is expected that many of the new Tory intake will be climate change deniers.

The consequence is that if they cannot kill the economy by spending cuts they’ll do it by over-heating the environment.

Worstall says of me:

he does, sadly, have some influence and exposing his near lunacy is a way of attempting to reduce that influence. As PG Wodehouse made clear with Roderick Spode the English way to deal with fanatics is to mock them.

I won’t mock Worstall. I won’t demand an apology either – despite the fact that the evidence is clear that he’s plain wrong. But I do, unfortunately, also think he has some influence through peddling misinformation. Which is why it’s worth tackling it. he and those like him have no prospect of power – but they influence the Tories – and that’s very worrying indeed.