Lies, damned lies and the CBI

The Guardian reports a spat between the UK's Trade Union Congress and the Confederation of British Industry on whether corporate tax rates should go up or not.

The TUC says yes, they should. Everyone has to make a fair contribution to the cost of running the UK, they say.

The CBI says no; angrily apparently. John Cridland of the CBI is reported as saying:

'What planet is the TUC living on? The tax burden on UK business has risen consistently over the past decade, just as other major economies have cut their business tax rate, causing a slide down the Organisation for Economic Co-operation and Development's tax competitiveness tables.

Well, I hate to point out the obvious to the CBI, but over the last decade the UK has seen a fall in headline corporation tax rates; from 33% to 30%, and it's seen bigger falls for smaller companies, proportionately, so as a matter of fact that claim is wrong. And so too is the claim that the tax burden on UK companies is rising. My work published earlier this year showed that the real tax liability of the top 50 companies in the UK over the last 5 years or so has gone like this: 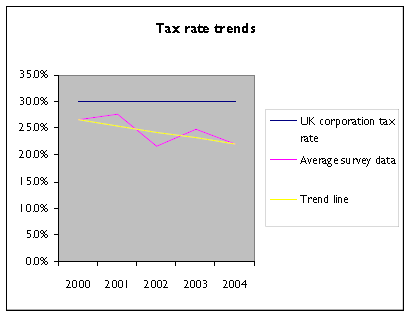 Try as I might, I can't make that trend line go up. It's falling. As, by the way is the liability companies pay for social security.

I agree, the total tax paid has gone up, but so have profits, enormously. So unless the CBI reckon that business should pay a flat rate poll tax their argument makes no sense whatsoever. And it is also, to put it simply, wrong.