I am pleased to share the following press release from the Joseph Rowntree Foundation. I am a non-executive director of Cambridge Econometrics:

Families trapped in poverty will see no Brexit dividend – unless the Government changes course on domestic policies, according to a new assessment by the leading authority on poverty in the UK, the independent Joseph Rowntree Foundation (JRF).

In new analysis published today, JRF warns that poverty and the cost of living are likely to increase and real wages to fall, even if favourable trading arrangements are agreed, as the country leaves the EU. This is at a time when we are already seeing the first sustained rises in child and pensioner poverty, and there are more workers living in poverty than ever before.

The analysis, by Cambridge Econometrics, models a range of post-Brexit trading arrangements, providing detailed results on the potential impacts on the cost of living, wages, and employment looking ahead to 2030. This ranged from staying in the single market (a ‘Norway’ scenario) to ‘no deal’, taking into account tariffs, non-tariff barriers to trade, immigration and investment.

In all scenarios, the cost of living is likely to rise and real wages to fall after the UK leaves the EU in the immediate period, however a ‘No Deal’ scenario is likely to have the largest negative effect on costs and wages.

It also found that:

Supporting analysis by JRF finds that:

JRF analysis shows the impact of three illustrative scenarios on poverty, comparing changes to housing, employment and social security to the possible impact of Brexit. It demonstrates that it is vital to maintain a focus on domestic policy, alongside negotiating Brexit and agreeing a framework for our post-Brexit economy.

“Many people on low incomes backed Leave after being locked out and left behind for too long. Since the vote to leave the EU, families have been hit by price rises in the shops, seen their wages eaten up by crippling housing costs and had their tax credits pared back.

“It’s hard to take control and build a better life when you’re juggling the bills and high costs are pulling you under. Two years on from the vote, this is unacceptable. And it will not change unless the Government gets a grip and delivers for people on low incomes. We need a bold package of domestic reforms, not just favourable trade terms.

“The Government must fix this and right the wrong of in-work poverty. At the last General Election, low income voters made it clear they wanted more than Brexit delivered, demanding action on living standards too. Failing to meet their expectations of a better life after Brexit would be costly for the political parties. And it would mean millions of families being let down – and seeing no Brexit dividend.”

As part of a new deal for low income families after Brexit, JRF recommends the Government:

Analysis of the Brexit vote and people in poverty was carried out by Matthew Goodwin and Oliver Heath in 2016 and is available here: https://www.jrf.org.uk/report/brexit-vote-explained-poverty-low-skills-and-lack-opportunities

Cambridge Econometrics has produced the following note on this study: 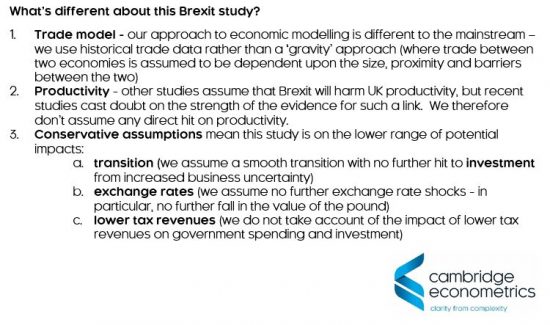 This is, in other words,  a good go at a best case scenario.