IPPR issued a new report on macroeconomic management yesterday. It's one of a series of reports link to their Commission on Economic Justice. To save time these are their recommendations:

In this context, we propose three areas of structural reform to UK macroeconomic policymaking.

1. We propose new fiscal rules to guide government policy, mitigating against both deficit bias and surplus bias. These include the separation of borrowing for current spending from borrowing for investment. Borrowing for current spending should be balanced over a rolling five-year period. Public investment (which supports long-term growth) should have a separate target as a percentage of GDP. Overall debt should be determined on the basis of its long-term impact on the economy. The proposed rules would provide stronger protection of government investment during recessions and increased flexibility to increase overall spending temporarily if interest rates are at the effective lower bound.

2. We propose that the Treasury considers revising the Bank of England monetary policy mandate. The Bank’s Monetary Policy Committee (MPC) should be asked to target one or both of unemployment and the level of nominal GDP, either alongside inflation or as intermediate guides to a primary inflation target. This would reduce the risk of monetary policy being over-tightened during a recession when inflation was the result of an external price shock.

3. We propose a significant institutional reform of the UK’s macroeconomic framework in order to provide an alternative means of delivering a spending stimulus when interest rates are very low. This would be superior to QE in terms of economic reliability and democratic accountability. We recommend the creation of an NIB, which under normal circumstances can help to provide countercyclical lending to support socially and economically productive investment in line with the priorities of the elected government. In addition, and to reduce reliance on QE, we recommend that the Bank of England is given the power to ‘delegate’ an economic stimulus to the new NIB when interest rates are at the effective lower bound and government fiscal policy is believed to be overly restrictive. This stimulus could take the form of increased lending for business growth, housing, innovation, and social and physical infrastructure. To ensure the extra lending can always be funded, we propose that the Bank of England is able to coordinate any delegated stimulus with additional purchases of NIB bonds from private investors.

Together, these proposed reforms to the UK’s macroeconomic framework would significantly increase the chances of effective policymaking in response to the next recession, while also retaining – and in some cases improving on – the balance between democratic accountability and economic effectiveness.

There are real issues here. Not with the third recommendation of course: that's people's quantitative easing (or green QE as it was once known) by any other name, pretty much exactly as I proposed it in various forms (I even summarised the 2003 origins of this idea on the blog yesterday afternoon, by chance). I am, of course, pleased that people are now realising that this really will be the only game in town when the next crash happens.

My problems are with the first and second proposals. To summarise the concern, I cannot fit either with economic justice. Let me explain.

Problem 1 - the commitment to the status quo

The IPPR paper explains the problems with monetary policy. It uses this graph to assist the explanation: 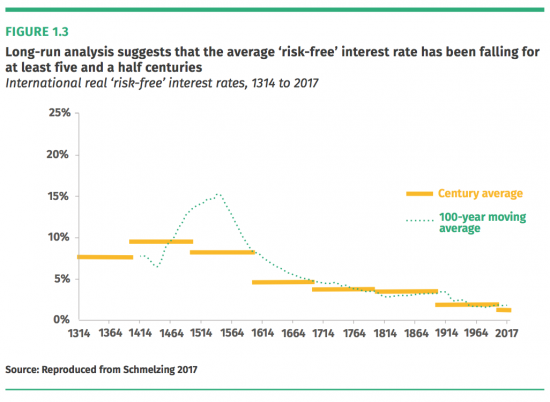 The reality is that interest is dying: rates are declining and there is no evidence that this is going to change. What that means is that there is no chance that monetary policy can now play the role it did in the economy in the past: the headroom that was required for it to do so cannot be recreated.

Nor is it desirable that it should be. The report notes that base rates of around 5% would be required now if monetary policy were to be effective in a future recession. But such rates would induce a recession. What this means that whatever merit monetary policy once had  (and that's open to question) has gone and is not likely to be returning to the political scene for a very long time to come.

But in that case the assumption in the report that the Bank of England should continue to have a fundamental role in managing the economy is, in my opinion, just wrong. The influence here appears to be Simon Wren-Lewis. For the record I have nothing against Simon: he writes a lot of sense on occasion. Bill Mitchell's treatment of him is absurd, in my opinion, and unhelpful. But I do remain baffled by much of Simon's economic reasoning. Although, as the report notes, he wrote in 2009 recognising the power of a hegemonic consensus in economics that mandated an orthodoxy that was not necessarily helpful, and he has also acknowledged MMT (unlike many other economists) he remains committed to the two fundamental harmful ideas that underpin this IPPR report.

The first is Bank of England independence. Leaving aside the fact that the effective demise of monetary policy removes any fig leaf of cover for this policy that it once had, there are major reasons why this policy is wrong.

The first is that it is a sham. As I have written in the past, the Bank of England Act of 1998 makes it quite clear that a Chancellor can always take back control if they want to: no Governor would ever ignore that reality. The veneer of independence does then have a different role as it does not actually exist.

Second, that different role is to remove power from central government because, as the IPPR report says it is believed that:

[O]ne of the key observations of the UK’s present macroeconomic framework is that elected Chancellors are prone to ‘deficit bias’. This insight was key to the design of Bank of England independence and the current macroeconomic assignment as a whole.

In  other words, the Bank of England is meant to stop government spending, even when there is need, so that monetary stability is mainatianed for the sake of financial markets.

This, I suggest, is not the route to economic or social justice. Nor is it democratic. The belief that the Bank of England should, despite this, stay in charge that runs through the report is wrong, but is always there, to the extent that it is said that:

We propose that in such circumstances [a downturn] the MPC be given the power to ask the National Investment Bank to expand lending in the real economy – for example, either by expanding existing projects or bringing planned projects forward – at a volume estimated to equate to all or part of the interest rate cut that the MPC would otherwise have wished to make.

In other words, in this plan it would not be for government to decide if additional spending was required in the economy, but for the Bank of England.

I can see no justification for this. IPPR has to place its confidence in democracy and not in power elites. The whole policy of supposedly independent central banks is about giving power elites control. That is not what economic justice does. IPPR have this policy wrong.

The IPPR report slavishly adopts the current Portes and Wren-Lewis fiscal rule that Labour made policy in 2016. This is amother serious mistake. There are two reasons.

Any country with a conventional central bank can ultimately create all of the money it needs to remain technically solvent on domestic debt.

Second, the reality is that QE can prevent debt escalation. There is then no need for a fiscal rule.

Indeed, this is apparent in the formulation of the Portes and Wren-Lewis rule, as adopted by IPPR, which provides that:

[F]iscal rules should be allowed to be temporarily suspended at the request of the Bank of England when its MPC judges that monetary policy is constrained by the effective lower bound. This would free fiscal policy for discretionary demand management when monetary policy is less reliable.

As noted above, this will always be true now: interest rates will be at or so close to the effective lower bound in the UK for all foreseeable time to come meaning that, using the noted logic, there is no case for a fiscal rule. So why have one except to pretend that the government cannot spend and so to provide cover for austerity? I cannot see another reason. This then brings me to my core concern.

My biggest problem wih the IPPR report is that it picks the  wrong priorities. This is apparent from its suggested priority for the new Bank of England mandate that it proposes, where it says the priority should be unemployment and the level of nominal GDP. Apart from hinting at an unhealthy concern with the Phillips Curve, these priorities are just wrong.

Nominal GDP growth has not delivered economic justice. Indeed, the possibility that growth might cause harm in the future has to be acknowledged because of its environmental impact. But there are issues too with picking on unemployment.

This implies that any job will do. It won’t. That’s what we have now, and serious social and economic injustice exists as a consequence. It is not just jobs that we need. We need good jobs, with high productivity, requiring solid training, and so rising median wages.

The IPPR targets imply trickle down can relied upon to transform growth into wage increases. We now know that is not true. IPPR should not be supporting such a mandate in that case. The goal of  economic policy, in which the Bank should have a secondary role, should be full employment with rising median pay. That is a mechanism to deliver social justice. The IPPR goals are not. They need to be revised.

IPPR is right to tackle macro. And they have got People's QE right. But social and economic justice requires that we break the hegemony that has created the injustice we are suffering. This report does not do that. As such it fails in its goal. I hope it might be revised.