Out today, from all good bookshops and some other outlets as well: 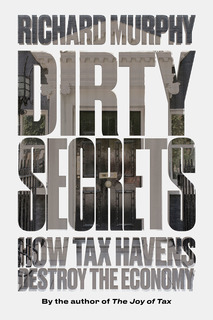 The UK publisher (Verso) says of the book:

What happens when the rich are allowed to hide their money in tax havens, and what we should do about it? The Panama Papers demonstrated that the superrich hide their wealth from the rest of us. Dirty Secrets shows that this was not by accident, but by design. It was the result of a powerful alliance of the wealthy, their advisers and the state that has undermined all attempts to solve the tax haven problem.

This is because tax havens are the unacknowledged heart of globalized capitalism. Their purpose is to provide freedom from regulation. The exponents say this makes markets work and so we all gain. But this argument has now failed. Furthermore democracy itself is being threatened by the political fallout from the mistrust this regime has created.

The result is that tax havens are now a threat to the very system that supposedly spawned it. Dirty Secrets is the most revelatory examination of the crisis by a leading expert, but also offers solutions on how governments can regulate havens and what the world might look like without them.

In the US the book is also published today but by Penguin Random House.

My own take is that the book takes the debate on tax havens a stage forward. For a long time it has been about corruption, tax abuse, loss of revenues and the impact of that. Let's not for a moment think that any of those things are unimportant, but tax havens are much more pernicious than that. They also undermine markets by denying the data that they need for resources to be allocated efficiently. As a result they concentrate wealth, increase monopoly power. undermine local business and stifle new enterprise, a process that is destroying capitalism from within. Added to this, by denying democratically elected governments free choice over their tax systems  tax havens deliberately oppose the freedom that democracy provides. The battle against tax havens is a battle for the mixed economy, democracy and our way of life. It has to be won.