I was discussing the state of the finances of the UK's large metropolitan authorities with a councillor with reason to know about them over the holiday period. Their concern was real; in fact I'd go further and say it was anguished. Faced with the impending imposition of the benefit cap, further benefit cuts from April and an effective and heavy further cut in central government funding in an area where council tax revenues provide only a small part in the overall revenues of the authority, their conundrum does seem to be legally insoluble.

They are legally required to deliver a balanced budget.

And they have legal obligations to house the people they must evict from properties for non payment of rent as a result of the combination of the bedroom tax, benefits cuts and the lack of smaller properties that they can move people to. They are also subject to constraints on providing over-crowded housing. And that is the problem in just one part of the service they must supply.

I presume the tale of very real woe I was told is not unique to the location that this person represented: I have checked and it appears commonplace to many large cities, as the Observer reported yesterday when noting that Sajid Javid is demanding councils keep to a maximum, five per cent tax increase even if much higher is needed to ensure legally required services survive.

I had only one answer to offer at the time. I referred to the government's sleight of hand with QE on which I blogged yesterday. Despite deficit claims the government will only borrow £8 billion this financial year. Using its power to create money it will pump £60 billion into the economy this year. That is £60 billion of debt it will not have to repay because it already owns it. And £60 billion it will not pay interest on, because just to make clear that this debt really is cancelled, no interest is paid to the Bank of England on its supposed holdings of government debt. That's because they aren't debt at all anymore.

Now let's suppose that the sum in question had not been used to buy government debt already in issue, which had been issued (I stress) to fund central government current spending, but had instead been used across the whole spectrum of government to support what government, whether local, regional, unitary, devolved and central, could do to improve economic well being for the future. Let's allocate just half of the £60 billion to this purpose. Then let's allocate it to devolved governments (they can decide if it needs to be distributed further) and UK councils (of which I have picked just a few a examples). The ONS provided country population data. Its website is so appalling that as usual I could not find other data I needed on it without spending too much time on the task so City data is apparently 2011 census based from here: it will do for illustration. I have simply allocated £30 billion based on sample populations as follows: 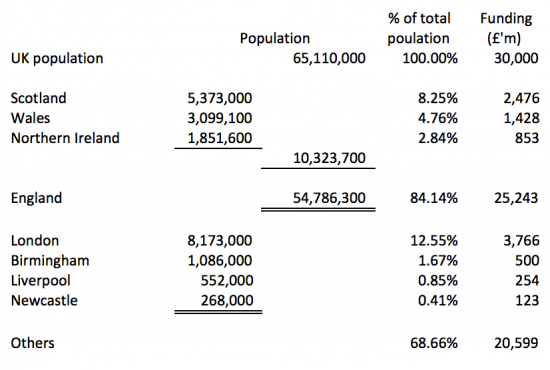 Suddenly the funding of local government is transformed because the power of the state to create money out of thin air has been shared.

Take Liverpool as an example, simply because the Observer sent me in their direction because they publish a funding model. This model allocates them £254 million a year. Liverpool is currently looking for savings of £90 million a year on top of the £330 million it has already lost overall a year since 2010. £254 million would not have stopped all the cuts but it would have made a massive difference. And it's not unrealistic to think that this sum could have been made available annually without impacting real inflation. That's because if half of all QE since 2009 had been allocated to councils and devolved governments the average sum allocated a year would have been £27.2 billion and Liverpool would have enjoyed £230 million of extra funding a year from 2009 onwards.

In that case there would be no social care crisis.

There wouldn't need to be 120,000 children without a home in the UK right now.

There could be better housing.

The list of what could have been achieved is endless.

But government kept the power to create money to itself and used it to benefit bankers, to boost house prices in the south east of England and to inflate the value of the stock exchange.

That was its choice. I would suggest it was the wrong choice.

I would suggest councils should be saying so as well.