Fake news is in the news. And it has, apparently, got to to be stopped. I agree. In which case I think it essential that the government, BBC, the Office for Budget Responsibility, economists and others stop lying about the extent of the government's debt.

It takes only the most cursory review of some data to reveal the extent of this lie. For example, in the OBR public finances databank they say that at 31 March 2015 they say the UK national debt was £1,548.5 billion.

Now that's interesting simply because the figure for national debt in the government's own accounts for the same date is nothing like that. It is instead as follows: 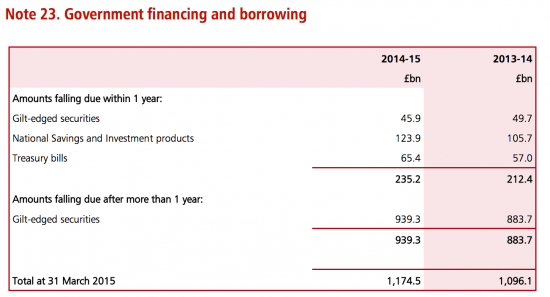 For the record that is £374 billion less. And that number is no coincidence, of course. That is almost exactly (uncannily) the same as the amount of quantitative easing undertaken from 2009 to 2012 once non-government assets are taken into account.

Now I accept that the government has other liabilities as a result. In particular much of the sum subject to QE ended up back on deposit with the Bank of England as this table shows: 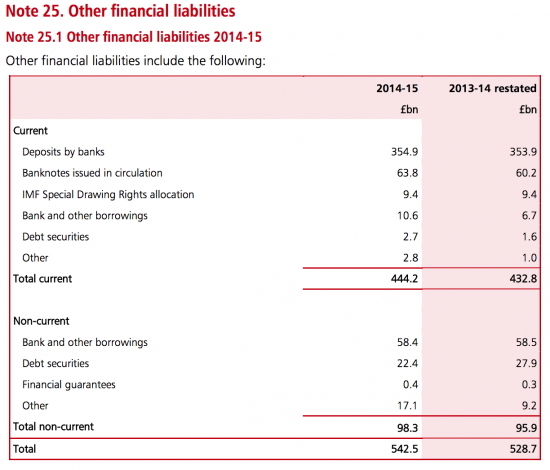 But the point is that the sums held by banks with the Bank of England are not, as such, national debt and are instead operating consequences of monetary policy. And they are subject to some control as a result. Which means they are not national debt - which is precisely why they are not described as such in the accounts.

So, to put it another way, national debt is not now in excess of £1.7 trillion, as is repeatedly said by politcians, newscasters and economists. It has been reduced by the amount of QE operations. That means that by March this year it is likely that national debt will not be £1,725 billion as preidcted by the OBR but will instead be that sum less £435 billion of QE, or £1,290 billion. That's more than 25% less than the government claims, which as lies goes is a pretty big one.

In that case why austerity?

Why a local authority funding crisis?

They're all based on a lie.

It's time we stopped fake news and told the truth about government debt. Because right now this country is being impoverished by fake news. And that's costing real people their lives, quite literally.