Would Brexit make it better or worse for the UK when the fourth industrial revolution hits?

A very good question was asked of a panel by a retired EY partner now teaching at a US university at the conference I was at in the USA last week. He made three points when looking at the financial projections of those talking about the trajectory of the US deficit.

The first was that we may be on the cusp of a medical break through. 3D printing of spare parts for the human anatomy at low cost coupled with other likely breakthroughs in cancer and in low cost disease prediction now make it very likely that human life expectancy may increase considerably. Twenty years is at least possible.

Second, there is much discussion in some quarters of the impact of technology on jobs. This is from the European Trade Union Institute and is drawn from well researched sources: 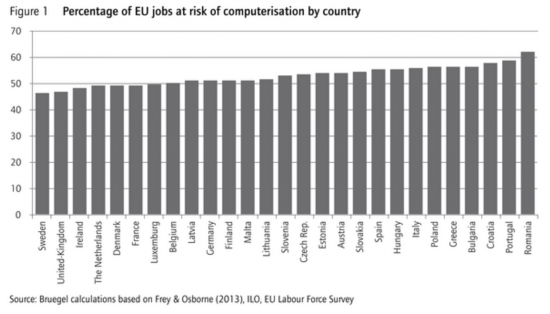 No one was taking this into account in their forecasts.

So, third, Richard G Larsen asked, what does this do for any forecasts except suggest that extrapolation from current experience os of almost no use at all?

Now, I admit to being guilty here. I often say there is little evidence of the impact of the likely effect of the next round of new technologies on people's lives, and I do so for good reason. That good reason is that I continue to assume that the changes will be beneficial, because that is the way that most have been perceived to date if we ignore the externalities that they have given rise to - which too many find it too easy to do. But what if the next round of change is not of this type at all? What if it is, as the above figure suggests, deeply disruptive of labour whilst also being relatively cheap in capital expenditure terms whilst accumulating considerable returns nonetheless? What then?

I admit that this occurred to me to be a deeply relevant question for the Brexit debate. The question to be asked is whether or not Brexit provides us with three things. The first is greater capacity to deal with changes such as these, if they are forthcoming. The second is whether it might provide greater resilience in the face of such change. And the last is whether Brexit might enhance our chance of reacting communally to the impact of what is to come.

In this context I presume capacity is a technical issue. If change is to happen there is a good argument that the UK might wish to be a part of it. We have already seen the tax stresses of, for example, having to pay US IT company subsidiaries located in tax havens for the use of technology. Is the real stress arising from that something that we would be wise to avoid by having technology developed and taxed here in the UK? I think so. But will Brexit let us, acting in isolation and without the benefit of proven trade treaty benefits for a considerable period, increase the chance of that development happening here in the UK? I doubt it.

So what of resilience? By this I mean our capacity to adapt to this change if it is to happen. I stress that adaption is both technical and social: here I am dealing with the technical aspect. By this I mean can we put in place the mechanisms to handle the consequences of change? These would include the need to tax the enormously increased returns to capital that would be earned in this country even if the legal ownership was elsewhere; the need to address the massively increased inequality in society that these changes could result in unless addressed appropriately by way of, for example, a universal income, and the need to reduce the free flow of capital to avoid taxation of capital that would otherwise undermine the capacity to reclaim tax from the economy. Here I have to admit that at present Brexit looks like it would help. The EU was built on the basis of a model of capitalism that has already been proven to be long outdated and inappropriate for twenty first century need but it is showing little capacity for change. It is not hard in that case to suggest that Brexit offers opportunity that remaining does not.

And what of social consequnces, the communal element to all this? Do we in the UK have sufficient sense in isolation, in our class and wealth divided society, built as it is on the notion of the entitlement of privilege, to overcome the enormous divisions in society that these changes could give rise to in a fashion that delivers rapid redistribution of the resulting income and gains so that all might continue to flourish in new ways despite the massive changes in the mechanisms of production that might take place? Might we as a socity in particular embrace the need for a much bigger government sector dedicated to meeting caring and educational as well as social need that will inevitably arise as a result of these changes?

I don't know the UK could do that alone: there are certainly strong forces lined up to oppose it. Would we better in that case working with others? My instinct is yes, we would be.

But what I make clear is that I do think these are Brexit questions. But as you can tell the answers are not clear.