The EU says its getting tough on tax, but isn’t

The EU has announced its new corporation tax action plan. It says:

Today the Commission presented an Action Plan to fundamentally reform corporate taxation in the EU. The Action Plan sets out a series of initiatives to tackle tax avoidance, secure sustainable revenues and strengthen the Single Market for businesses. Collectively, these measures will significantly improve the corporate tax environment in the EU, making it fairer, more efficient and more growth-friendly.

Key actions include a strategy to re-launch the Common Consolidated Corporate Tax Base (CCCTB) and a framework to ensure effective taxation where profits are generated. The Commission is also publishing a first pan-EU list of third-country non-cooperative tax jurisdictions and launching a public consultation to assess whether companies should have to publicly disclose certain tax information.

So, the plan is to relaunch an idea (the CCCTB) long ago rejected by too many member states to think it has too much hope now, even if there is real merit to it. Because of that they've dropped the consolidated element for now - which makes the whole exercise largely meaningless.

And it is to have another consultation on country-by-country reporting when we all know it is needed. That's got its own web page here. Yes, I will be doing a submission.

And it is to publish a list of 30 states considered non-cooperative. This is new. They are: 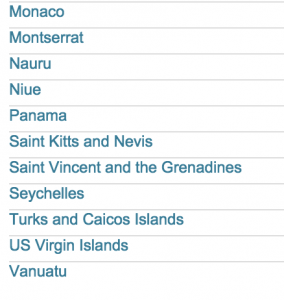 The usual culprits excluding the EU abusers plus Jersey, the Isle of Man, Singapore, Switzerland and all the other places likely to be of significance. So again, of little real use to be candid at this stage of the game.

It's a disappointing outcome unless it delivers country-by-country reporting - and the EU Parliament will be voting on that anyway on about 7 July.

It's a shame that what we got was noise and little action.

Which leads to the question as to whether that is all the combined states of the EU can now deliver on tax? And if so, how did we reach such an emasculated state?