The IMF says the rich getting richer harms us all

As the FT notes this morning the IMF has issued a report that says:

When the rich get richer, a country’s economic health can suffer. But if the poorest members of a society start climbing the wealth ladder, then national growth can receive a boost.

This is the IMF's most powerful research on this issue yet. It has previously said that tax yields are harmed by wealth concentration; now it is extending its findings to say that growth is harmed by inequality.

To be precise, the FT view of the IMF paper is best summarised in this graph: 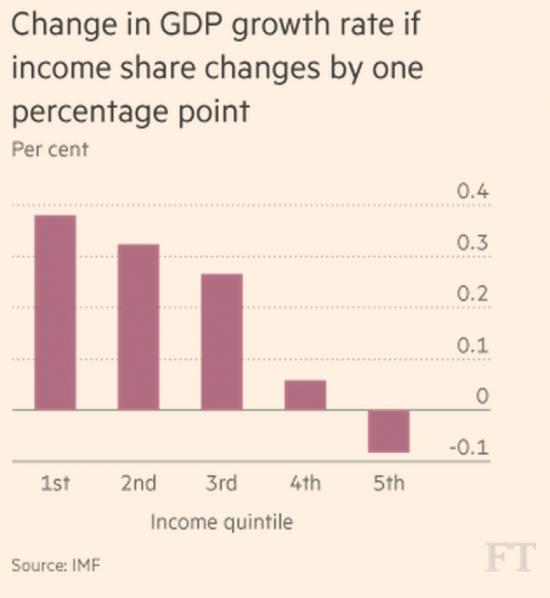 The evidence is clear: trickle up harms growth whilst helping those on lowest incomes is the best way to increase overall wellbeing. It's hardly surprising, but it's taken a very long time for it to be said.

I reflected on cherry picking the IMF report for quotes, but I have not had time to read it all as yet (unsurprisingly) and in any case the exectuive summary os powerful and compelling, so I quote that at length instead. It says:

Widening income inequality is the defining challenge of our time. In advanced economies, the gap between the rich and poor is at its highest level in decades. Inequality trends have been more mixed in emerging markets and developing countries (EMDCsf), with some countries experiencing declining inequality, but pervasive inequities in access to education, health care, and finance remain. Not surprisingly then, the extent of inequality, its drivers, and what to do about it have become some of the most hotly debated issues by policymakers and researchers alike. Against this background, the objective of this paper is two-fold.

First, we show why policymakers need to focus on the poor and the middle class. Earlier IMF work has shown that income inequality matters for growth and its sustainability. Our analysis suggests that the income distribution itself matters for growth as well. Specifically, if the income share of the top 20 percent (the rich) increases, then GDP growth actually declines over the medium term, suggesting that the benefits do not trickle down. In contrast, an increase in the income share of the bottom 20 percent (the poor) is associated with higher GDP growth. The poor and the middle class matter the most for growth via a number of interrelated economic, social, and political channels.

Second, we investigate what explains the divergent trends in inequality developments across advanced economies and EMDCs, with a particular focus on the poor and the middle class. While most existing studies have focused on advanced countries and looked at the drivers of the Gini coefficient and the income of the rich, this study explores a more diverse group of countries and pays particular attention to the income shares of the poor and the middle class—the main engines of growth. Our analysis suggests that

 Technological progress and the resulting rise in the skill premium (positives for growth and productivity) and the decline of some labor market institutions have contributed to inequality in both advanced economies and EMDCs. Globalization has played a smaller but reinforcing role. Interestingly, we find that rising skill premium is associated with widening income disparities in advanced countries, while financial deepening is associated with rising inequality in EMDCs, suggesting scope for policies that promote financial inclusion.

 There is no one-size-fits-all approach to tackling inequality. The nature of appropriate policies depends on the underlying drivers and country-specific policy and institutional settings. In advanced economies, policies should focus on reforms to increase human capital and skills, coupled with making tax systems more progressive. In EMDCs, ensuring financial deepening is accompanied with greater financial inclusion and creating incentives for lowering informality would be important. More generally, complementarities between growth and income equality objectives suggest that policies aimed at raising average living standards can also influence the distribution of income and ensure a more inclusive prosperity.

I added the emphases, because their implications are enormous. I only have time to really consider them in the Uk context in this blog: I leave others to look at the broader issue.

What the IMF is saying, in my opinion, is:

This, though, challenges much of the existing hegemony. Tax support for the wealthiest and the companies they own is not, according to this analysis, not the way to growth. That way is via more tax to pay for better education and health care. And if support is to be given to business it needs to be delivered to micro business, not large companies.

And the language of our society needs to change: the real wealth makers are ordinary people, not those at the top on the basis of this analysis.

What is more, it pays the wealthiest to agree.

But that's not how these things work, of course. The long known psychology of wealth is to pull the ladder up behind you to deny others what you have got out of fear that you might otherwise fall.

The challenge is how to challenge that, effectively.

It's a challenge that must be taken on.