Amongst the new tax data from HMRC published today was updated information on the income of the self employed. That for 2012/13, the most recent year, was as follows: 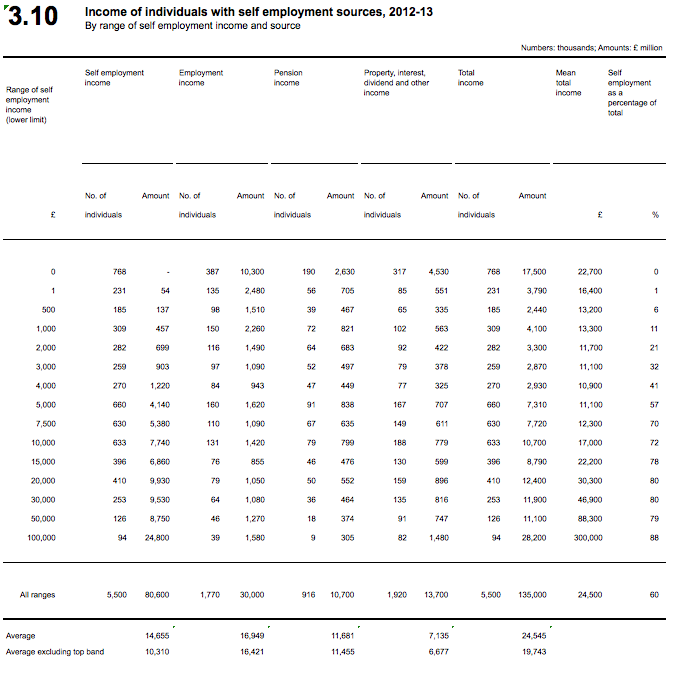 That was interesting. It shows a large number of the self employed are part time, and earning as much or more from employment as self employment. That means the government's assumption that a self employed person is a full time person is nonsense, to be polite.

It is also quite remarkable that one sixth of all self employed people are also in receipt of a pension.

But a little more digging revealed much more interesting data. Over the first three years of the Coalition's life this is a summary of the data:

The income of the self employed earning less than £100,000 fell over this period.

The average income of those earning more than £100,000 was staggeringly different:

Over the period this rose, of course. Only a little, but it did rise (and band inflation given the overall rate of earnings inflation during this period is not going to explain this).

So, what are the conclusions?

Second, if two thirds of median pay is a measure of poverty (or £15,000 or less here, at least) then 84% of the self employed would be in poverty based on their self employed earnings and 77% are based on total income.

If this is a market based solution to inequality it very clearly fails.

Although I would add, I suspect all these figures are understated because of tax evasion, but right across the board.