Osborne is planning to destroy society as we know it. What are we going to do about it?

I have had time overnight to read what was impossible for me to do yesterday due to broadcast and interview commitments and sheer fatigue, which is read the Office for Budget Responsibility report that supports the autumn support.

As a result the report is shocking for its tacit acceptance of the scale of cuts that are proposed. This paragraph is key:

On the Government’s latest plans and medium-term assumptions, we are now in the fifth year of what is projected to be a 10-year fiscal consolidation. Relative to GDP, the budget deficit has been halved to date, thanks primarily to lower departmental spending (both current and capital) and lower welfare spending. The tax-to-GDP ratio his risen little since 2009-10. Looking forward, the Government’s policy assumption for total spending implies that the burden of the remaining consolidation would fall overwhelmingly on the day-to-day running costs of the public services — and more so after this Autumn Statement. Between 2009-10 and 2019-20, spending on public services, administration and grants by central government is projected to fall from 21.2 per cent to 12.6 per cent of GDP and from £5,650 to £3,880 per head in 2014-15 prices. Around 40 per cent of these cuts would have been delivered during this Parliament, with around 60 per cent to come during the next. The implied squeeze on local authority spending is similarly severe.

To put this in context, this scale of cuts has the following impacts when expressed per person: 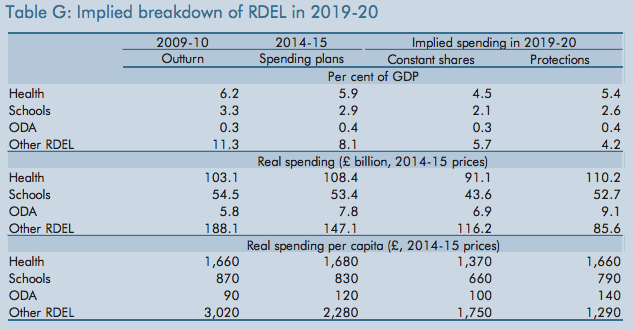 The data shows that schools, health and development spending are ring fenced (although this appears to be little comfort for education, which is worrying), but then shows the impact on all other spending. This will fall from £3,020 a head in 2009 to £1,290 in 2019 if Osborne's plan is to work. The cut is 25% to date. The total required cut is 57%. The cut to come is 44% of current service supply.

This is not trivial stuff. This is defence, the police, social security and most spending that protects the vulnerable. It is the environment, foreign relations, housing and day to day flood defences. It is business regulation and health and safety (including things like food). It is the basic infrastructure on which our society is built. And it is going to disappear, very fast.

This is because it is assumed that the economy will be balanced by cuts and not by additional taxes, as this table shows: 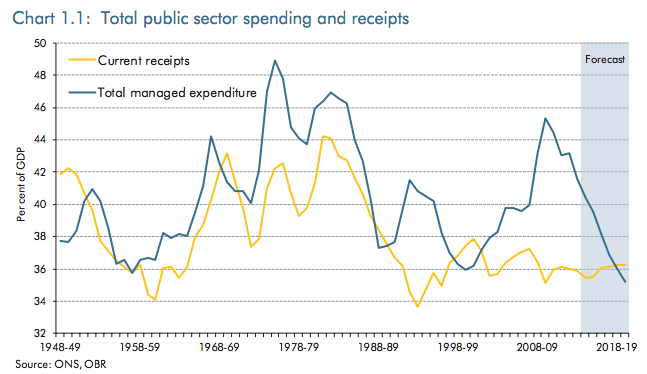 Tax revenues are forecast to bump along as they have done for 25 years: spending is forecast to be slashed to levels not really known for decades.

And this is assumed to happen despite the fact that some estimates suggest that 1 million people will lose their jobs in the public sector as a result of the planned cuts.

In fact, the suggestion that the economy will rebalance and grow modestly despite these cuts does itself look wildly optimistic. As I have often said there are only four drivers of GDP: consumer spending, business investment, foreign balances on trade and government spending. The FT has summarised the expected contribution the OBR thinks each of these will make to the creation of the government's desired outcome as follows: 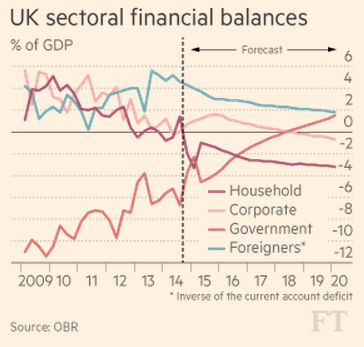 The OBR is suggesting that the government will achieve a surplus because the trade deficit will fall, considerably (when the EU is in the doldrums and is by far out biggest trading partner), business will start investing much more than it has even though recent signs are that they have reversed this trend and are saving again and that households will move from net saving into taking on considerable debt again to fuel spending way ahead of earnings growth. In other words, George Osborne is assuming that a consumer credit boom, probably based on a house price boom, will create growth even though he will be slashing pubic services but will make no change to net taxes.

All of this is deeply delusional on Osborne's part. It's almost impossible to decide where to start to explain how unlikely it is that these plans can be fulfilled.

First, cutting most public services and benefits by 44% over the next five years is impossible. We will have a break down in law and order, in public health, in housing, in safety and more. We will have bankrupt local authorities. We will have massive numbers of people homeless children living on streets.

Second, people will not accept such massive cuts whilst being expected to pay the same tax: the bargain between people and state will fail.

Third, if people realise that all social safety nets have failed they will not spend more: they will do all they can to save because that is the only way they will have to protect themselves if things go wrong. There will be no credit boom.

Fifth, there is no hope of improved trade.

Sixth, tax receipts are already £23 billion below expectation and the OBR now seems to think that this trend is permanent. That may well be right; new jobs are low paid and the self employed have no one left to police their declarations because HMRC is to be further decimated and so the tax gap will rise, considerably.

Seventh, business will not invest. Against this background there is no reason for them to do so. After all, most business investment is known to be stimulated by demand from their biggest customer, which is the government, and there will be no such demand.

At all levels this plan does not work. Worse than that: trying to deliver it is wrong. We have no deficit crisis. We have a crisis of shortage of tax revenues. And we have no need to balance the books: people want to buy government debt. Why deny them the chance? Economically, all the objectives of this plan and all the analysis in it are wrong.

But worse, it is a recipe to destroy society as w know it just as the government is trying to destroy democracy as we know it.

Labour will sweat the small stuff, like whether or not the NHS is to get £2 billion of extra funding. But there is a giant elephant in the room and it is whether the society we built post war in which all can participate will survive. That is what is at stake here. Osborne is presenting a plan based on his desire to destroy not just the welfare state, but much of the state itself and wants to take us back to an era where fear was pervasive for most, with a few being able to exploit that for gain.

The reality is that the OBR report makes that clear. And it is time all politicians talked about it. We're not dealing with the small stuff any more. Society is at threat. What are we going to do about it?