The era of country-by-country reporting is arriving

The OECD has announced its 2014 outcomes from the Base Erosion and Profits Shifting process this afternoon. As far as I am concerned the key issue is country-by-country reporting, which is the subject of BEPS Action Plan 13. The summary on this issue, just published (sent to me by mail, a link will follow) is:

This document contains revised standards for transfer pricing documentation and a template for country-by-country reporting of income, earnings, taxes paid and certain measures of economic activity.

The country-by-country report requires multinational enterprises (MNEs) to report annually and for each tax jurisdiction in which they do business the amount of revenue, profit before income tax and income tax paid and accrued. It also requires MNEs to report their total employment, capital, retained earnings and tangible assets in each tax jurisdiction. Finally, it requires MNEs to identify each entity within the group doing business in a particular tax jurisdiction and to provide an indication of the business activities each entity engages in.

As the OECD say:

Taken together, these three documents (country-by-country report, master file and local file) will require taxpayers to articulate consistent transfer pricing positions, will provide tax administrations with useful information to assess transfer pricing risks, make determinations about where audit resources can most effectively be deployed, and, in the event audits are called for, provide information to commence and target audit enquiries.

In October 2002 this is what I told John Christensen country-by-country reporting could do when we first discussed how to tackle transfer pricing abuse. No one ever discussed it before we did. The first proposal for it followed soon afterwards. Twelve years later it's now to be part of the official armoury for tackling the issue. I am, of course, pleased that we've got this far.

That does not mean we have all we want on country-by-country reporting. The OECD requirement is vague on some issues, like the approach to consolidation, but equally it is robust on others where we made very strong representations to it. So, for example, every jurisdiction has to be included in the country-by-country reporting template (copy below, taken from pre-release document - confidentiality restrictions have now been lifted; I am not leaking): there is no let out for supposedly immaterial places - which many tax havens might otherwise be claimed to be. And vitally, sales from a jurisdiction have to be split between those to third parties and related parties - so highlighting the impact of potential transfer pricing issues on the profit declared in the location. This data, plus that on employee numbers, tax accrued and paid (something I insisted on in debate in Paris, and which I am glad to see has been agreed) and estimates of capital do now allow any tax authority to undertake a unitary apportionment calculation for any group. 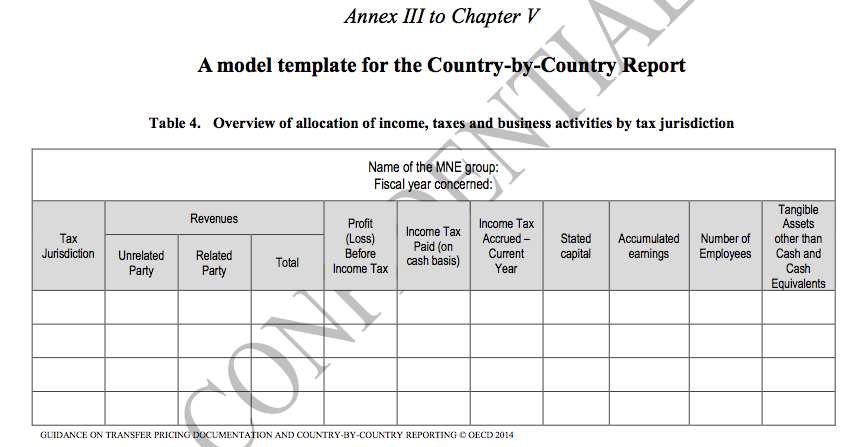 This calculation reallocates profits on the basis of where sales are (unfortunately sales by destination is not available in the OECD data, but that will come, I am sure), where employees are and where assets are. Total group profit is apportioned on this basis to see whether declared profits are allocated in a manner broadly consistent with this estimate based on underlying economic activity. If they're close the group is not worth transfer pricing attention and if they are far apart then it is. It's as simple as that. That's exactly what I wanted tax authorities to be able to do, and now they can, which is great news.

And that means something else, which is that no multinational corporation can ever argue ever again that it does not have this data or that it would be too costly to publish it.  The time has come for that sham to be dropped. We need country-by-country reporting data on public record and we now know we can have it. The time to conclude the debate on this issue really has arrived.

Multinational corporations have a duty to account to each and every jurisdiction where they operate for what they do in that place. The data in this table would be a great start as a basis for published country-by-country reporting data, although ideally some more detail, such as sales by destination as well as source would be added, and a consistent approach to consolidation would be required, but a process has begun and the outcome is, I think, inevitable. The era of country-by-country reporting is arriving.