UKIP, tax and the £200 billion hole in its budget for which Farage has to supply answers

One of the biggest difficulties in writing about UKIP is knowing what to say. If it's true that Labour still remains policy light, that the Tories are riven with disagreement, that the Lib Dems have steered so far right they have fallen off the map and that the Greens are thought to be a single issue party when they're not, then with UKIP the problem is finding anything to say about what they think, unless it's immigration.

Take an example. It's not long ago that I wrote, based on their website, that UKIP believed in flat taxes. Now, apparently, they don't. As Isabel Hardman wrote in the Spectator in late April:

When he spoke at a press lunch on Tuesday, Farage accepted that UKIP’s flat tax policy was ‘incomplete’, but that UKIP’s aspiration was to have taxes as low as possible. Last night, asked whether he still wanted a flat tax, he said:

Simon Hughes pressed him on what his tax policy was, to which he replied:

‘We will have no tax on the minimum wage and a mass simplification of the tax policy, with a lower rate. We will abolish National Insurance, roll it into tax because all it is is tax anyway.’

He added that higher earners would pay ’40 per cent or something like that’, adding:

But this is not all it seems to be, incomplete as it is. Why is that? It's simply explained. This is the chart of expected government revenue for 2014-15: 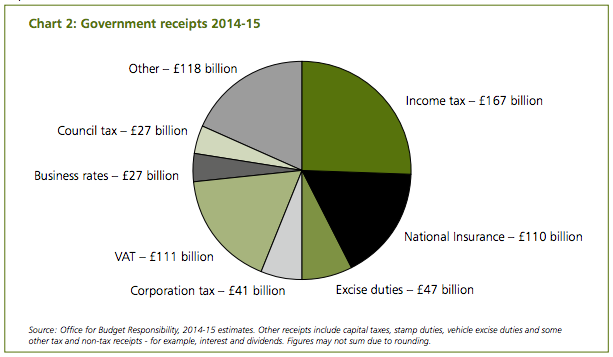 So, Nigel Farage is going to scrap a tax that collects £110 billion and reduce the top rate of income tax to 40% and then raise the personal allowance by maybe £2,000. The last would cost over £12 billion by HMRC reckoning (and I am being generous here, and rounding down). What that means is he will have a black hole in revenue of well over £120 billion.

Now you take your pick of what he is going to cut from this list, remembering that a tiny proportion of all benefits paid are to the unemployed and we already have a deficit of at least £84 billion, meaning that with his additional £120 billion of tax cuts there will be more than £200 billion of savings to find: 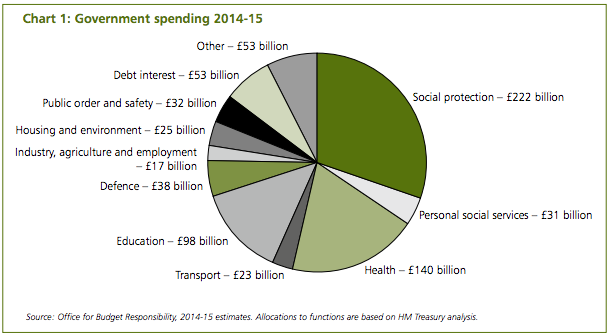 Scraping education would help do the trick. You could also get rid of the old age pension. Or the NHS, defence and public order and safety could go and he'd balance the books. And if not that, what?

That's the question Farage needs to answer because right now his tax policy makes no sense at all and leaves us with either a £200 billion or so deficit or cuts on a scale no one has ever imagined, and someone has to ask what he really means. Until they do we have no meaningful debate in this country.