The Group of the Progressive Alliance of Socialists & Democrats in the European Parliament issued a report at their press release this morning, part of which dealt with the EU tax gap.  This report, which is based on my work (the full report is now available - here), was as follows:

TWO SIDES OF THE SAME COIN

1.         The main finding of the study commissioned by the S&D Group from Tax Research London is that â‚¬1 trillion are lost in potential tax revenue every year (EU27).

2.         This loss of public revenue plays a substantial part in the deficit and debt levels we are currently facing, which in turn is negatively affecting public investment levels, growth and employment.

3.         A large part of this non-taxed liquidity is feeding into financial trading activity rather than private or public consumption, and investment.

Therefore, by forcefully addressing this "tax gap", the EU could at the same time:

The EU must take strong action at European and at national levels at the same time. To provide the necessary focus, the European Council must agree on an ambitious while realistic headline target: Halving the tax gap by 2020. By moving towards this target, member states would gradually achieve new tax revenue without raising tax rates at the level of several hundred billion â‚¬ a year.

This target can be reached by ensuring action on mainly five key issues:

This will have to include adequate EU-wide agreements with key non-EU countries currently providing platforms for financial institutions facilitating tax fraud and evasion activities from within the EU, such as Switzerland. The report provides over 30 detailed proposals for policy action at EU and at member states levels.

Using consistently credible sources the report provides a resulting estimate of tax evasion in the European Union of approximately â‚¬860 billion a year. Estimating tax avoidance is harder; however, an estimate that it might be â‚¬150 billion a year is made in the report.  In combination it is therefore likely that tax evasion and tax avoidance might cost the governments of the European Union Member States â‚¬1 trillion a year.

In a significant number of countries tax lost as a result of the shadow economy might represent more than 20% of total government spending and as a proportion of government revenues that sum lost does in some cases exceed 30% of total income.

On average the tax lost as a result of the existence of shadow economies in Europe represents 105.8% of the total health care spending in EU countries. 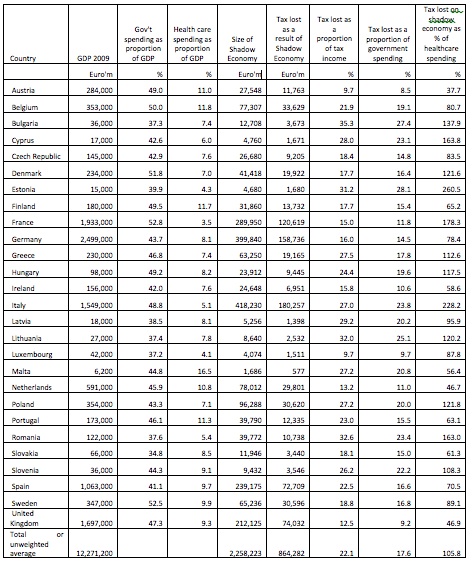 Furthermore, the amount of tax lost is on average more than 4 times higher than the amount spent on education. 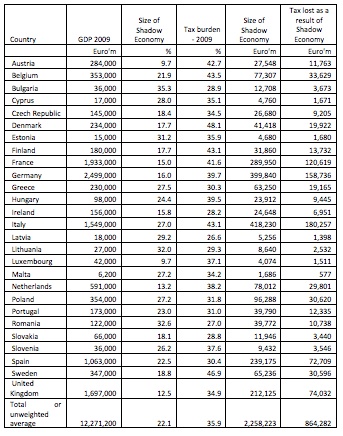 Finally, the following table compares tax losses with government deficits and total government borrowing based on European Union data. If tax evasion could be stopped total EU public debt could be repaid in just 8.8 years: 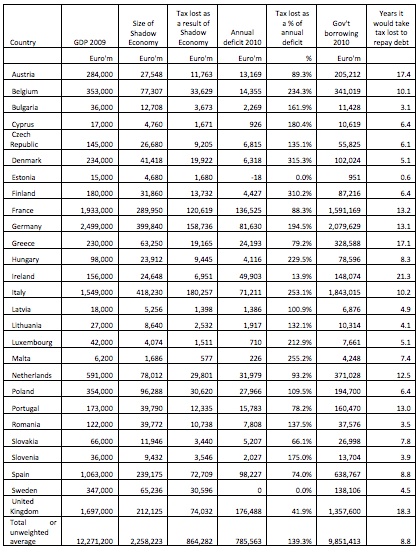