I was amused (in a depressed sort of of way) to read the Observer's headline yesterday saying:

It takes some considerable stupidity (no point beating about the bush here) to suggest that when the market has failed (as it has) that individual shareholders can be given the power to put things right.

Let's think about why that isn't going to happen. The last survey of share ownership in the UK was prepared by the Office for National Statistics in 2010 based on ownership in December 2008. It showed the following: 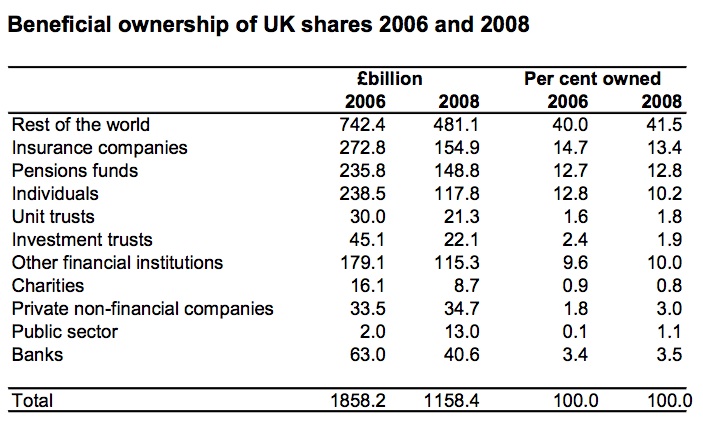 So Cameron says 'people power' voting against high pay is going to solve the problem. Let's ignore how Blairite that sounds for a minute, let's instead just look at the reality of it.

More than 40% of the FTSE is owned overseas. They're not going to run to the defence of the UK economy.

Pension funds and insurance funds are for all practical purposes similar - and part of the same financial power hierarchy as the banks. So they're not inclined to vote for change. Sorry to be so cynical - but this group have shown themselves time and again to persistently fail those whom they are meant to represent and to side solely with those who might pay their bonuses - many of which are based on inappropriate trading and, frankly, churning.

The same pretty much applies to the banks and all other financial institutions.

So in the vast majority of cases we're down to charities and individuals. The trouble is those individuals are likely to be very wealthy. And first they don't vote - their fund managers do for them and second whose wide are they on?

So maybe charities and the public sector can be relied on to support the call on most occasions.

So much for 'Cameron's people power' but candidly it's so ludicrous an idea he really must think we're stupid to believe that all these people will vote against high pay.

And yes. I know the odd resolution has got support counter to this argument - but it's so rare it's simple proof of the rule. They've also almost never been won.

So Cameron is offering reform safe in the knowledge it will never harm his friends. How Tory is that?