There are many people in the UK who wonder where the money's gone.

Many more wonder why we are so much in debt.

Yet more wonder how the deficit is paid for.

Let me offer you a graph as explanation. It was prepared by Stewart Lansley, author of The Cost of Inequality: Three Decades of the Super-Rich and the Economy, to whom I am grateful. The data is from the Office for National Statistics and shows the share of wages in UK GDP: 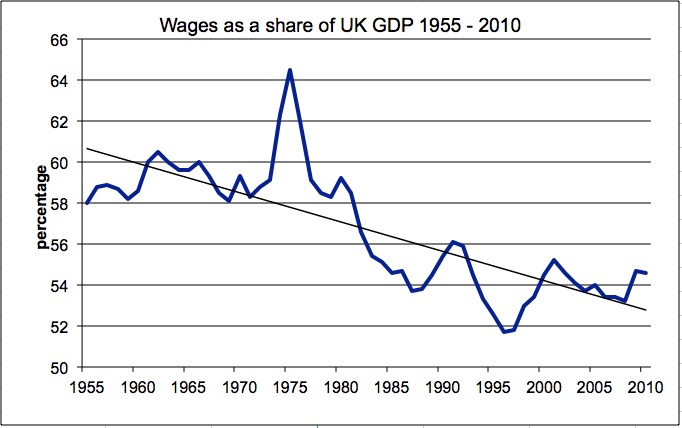 I have added a linear trend line to make clear just what is happening.

Now they're running at about 53% (the upward blip in 2010 was due to a fall in productivity at the start of the recession; now unemployment is rising that will reverse again).

This is money that has shifted as productivity has risen from labour to capital since profits have risen to absorb this shift. The shift has been especially marked since the 1990s.

The result was a rise in consumer borrowing to maintain living standards. That borrowing was funded by those earning excess profits, which have not been invested (especially since 2000, since when the fall off in real investment has been dramatic) who simply lent it to those who were being squeezed by them. The result was obvious: we had more debt, greater inequality and the recipe for economnic disaster.

And now that people aren't borrowing so much? Well now the excess is simply being lent to the government instead. That excess profit is what is now funding the government deficit, as Martin Wolf has pointed out in the FT, often.

There's a tale or two in this. First those who claim we need fiscal conservatism 'because the money has run out' are not telling the truth: the money's there all right. It's just been shifted to wealth owners, who don't want to pay tax on it which is why government is borrowing so much. To accept the 'money is run out' argument is to simply say this shift and the resulting inequality is a done deal.

Second, if we could collect the tax due on capital as we can on labour then we wouldn't have a debt crisis now. Enabling this is the basis of much of the campaigning I do.

And third, nor would we have a debt or economic crisis if we had more equality in our society. So again those calling for fiscal conservatism and the inequality that is an inherent part of it are simply wrong.

I do not for a minute accept the argument that the money has run out in the economy and so fiscal conservatism is necessary. That's not, as its proponents say, Keynesian. Keynes would be arguing for big deficits now and the proponents of fiscal conservatism are not. What they're saying is the bankers have won, the shift in wealth in the economy is permanent, there's nothing we can do about it so austerity for most whilst a few enjoy massive wealth without responsibility is the new order we must accept.

We do so at our peril. Down that route lies social chaos and worse.