There are two ways of looking at this. The first is the simple data on companies formed and dissolved each year in the UK, the graph of which based on Companies House data (all links in main report) looks like this: 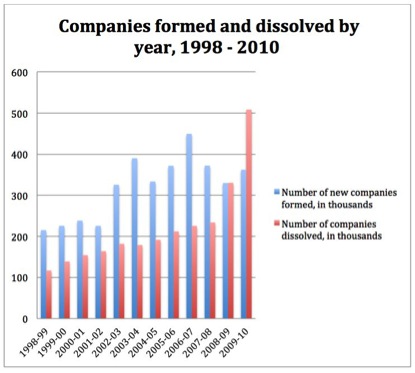 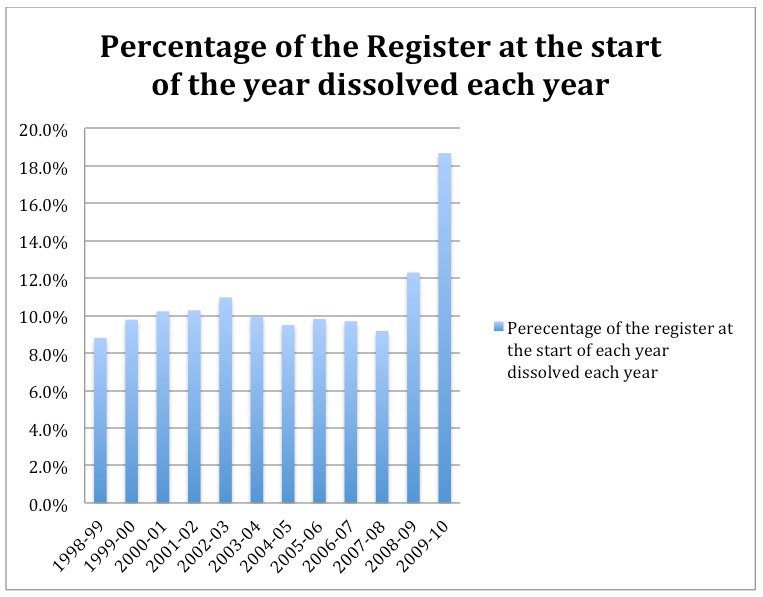 The issue would not matter too much of we knew about these companies. But the fact is we don't. In a sample survey of companies struck off in September 2010 undertaken as part of the research it was found that almost one third of all companies struck off were under two years old. Just two per cent of these companies had filed accounts. As a result almost nothing was known about them. Worse still, so keen is the Registrar to strike companies off that in a great many cases companies were removed from the Register before they'd ever had obligation to file accounts with Companies House or H M Revenue & Customs. Failing to file the first annual return form is enough to get a company struck off in double quick time.

This is important. The consequence is that:

i) a significant number of companies are never required to file accounts because the Registrar of Companies dissolves them before they have legal obligation to file their first set of accounts or a corporation tax return.

ii) The consequence is that the directors of many companies are relieved of their legal obligation to declare its tax liabilities as a result of the actions of the Registrar of Companies;

iii) It remains entirely possible that these companies do, after striking off carry on trading using their corporate identity and never thereafter file accounts or tax returns, contributing significantly to the shadow economy;

iv) The perfect opportunity to set up a company, trade it and then let it disappear without trace is provided courtesy of a UK regulatory agency, with the directors having no responsibility or liability for the dissolution or the making of false statements to any regulatory authority to secure this dissolution as a result of the striking off of their company by Companies House without action on their part being required. Immunity from any likelihood of prosecution is therefore granted to those directors using this loophole without anyone in authority seemingly being aware of this fact.

In addition 24% of the sample had accounts over due for filing when struck off. Up to date data on trading was, therefore, available for fewer than 20% of companies when struck off.

The conclusion is obvious: enormous numbers of companies are disappearing without trace in the UK without the Registrar of Companies knowing a thing about them. And the cost of that falls on all of us who allow this situation to persist. It's a cost from fraudulent trading, lost tax, potential criminal abuse of UK companies and even the possibility that UK companies are used for money laundering or terrorist financing with little or no chance of detection.

Is that a situation we really want to persist in the UK?

And why hasn't this been noticed before?

These are issues I will address shortly.