I published this blog last September when The Finance for the Future, in which I am a partner, published its report, Making Pensions Work.

As the following detailed calculations show, however, the much bigger problem is that in practice private pensions are the sector that is not working: every single penny of private sector pension paid right now is covered by subsidies given to that sector by the state. This is the real pension crisis.

The truth is that right now there is no alternative to state pensions - and we need to recognise it. Unless private sector pension funds are reformed it is they that are failing - and that crisis is not being addressed.

The data on which I base this conclusion is as follows:

In the financial year 2009/10 UK state pensions cost the Exchequer £66.8 billion[i]. In combination that was 54.1% of all benefits administered by the Department for Work and Pensions (totaling £123.3 billion)[ii] and amounted to almost exactly 10.0% of all government spending[iii] and 4.8% of UK estimated GDP[iv]. The equivalent figure for old age pensions in 2007/08 was £57.6 bn[v]. This however, is not the whole story when it comes to the cost to the state of pension provision. When the full story is told the situation is much more complex.

To put this in context, in 2007/08 (the latest year for which comprehensive data is currently available) HM Revenue & Customs record that income from all “other pensions” (i.e. pensions other than state old age pensions) declared on tax returns amounted to £60 billion[vi]. This figure is somewhat bigger than the figure calculated by National Statistics for total pension fund payments in that year, which amounted to £35 billion (plus an additional £6 billion of very largely tax free lump sum payments made on retirement which are therefore not reflected on tax returns)[vii].

The reconciliation between total “other” pension income of £60 billion and the sum paid by private pension funds must, of course, be made up of the unfunded, pay as you go, state pensions paid as a result of accrued employment rights. These arise, for example, for members of the civil service who work for the state and who nominally contribute part of their salary to a pension fund as a consequence, but where the state does not actually invest these funds but does instead use them to pay the pensions of those already in retirement – hence the term ‚Äòpay as you go’. The total of these pension payments, by deduction, amounted to approximately £25 billion in 2007/08. As a proportion of GDP this is 1.7%, a number confirmed to be correct by the National Audit Office[viii].

A summary of pensions paid in 2007/08 is, therefore, as follows (within reasonable parameters of calculation):

Of this sum £82.6 billion appears to be paid directly by the state and £41 billion by the private sector of which £6 billion is not treated as income for tax purposes.

It may also be worth noting that National Statistics additionally calculated that pension funds spent £5 billion on administration and costs in 2007/08, bringing the total cost of paying taxable pensions of £35 billion to £46 billion in the year[ix].

It is then important to note that in the same year, 2007/08, the total sum paid by companies and individuals into pension funds amounted to £83.1 billion[x]. The total tax relief given on these contributions cost HM Revenue & Customs £37.6 billion in the year in question[xi]. This is made up as follows[xii]: 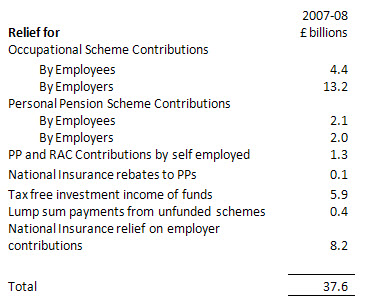 As is clear from this data – a belief in private pensions as the basis for future provision looks forlorn because even in their good years (which may now be over) they appear to have supplied only £35 billion of ongoing pension payments (at most) out of a total of £117.6 billion of total pension payments, or less than one third of pension payments. And they did so at a total cost to the state for pension tax relief of £37.6 billion.

Putting this data together does suggest that the total cost to the state of paying pensions is:

In other words, and allowing for inevitable rounding in all estimates of this sort and the fact that these ratios are bound to change a little from year to year, every single pension payment made in 2007/08, totalling £117.6 billion in all (if lump sums are ignored) was made at eventual direct cost to the UK government, even if not paid directly by it. The private sector did not, in effect, bear any of the burden in that year of paying pensions to members of private sector pension funds. Those private pensions were, in effect, paid entirely out of the state subsidies that the pension industry or those making pension contributions (whether as employer or as employee) received, directly or indirectly.

[xi] http://www.tuc.org.uk/pensions/tuc-16929-f0.cfm. Note the ratio is more than 40% because of the combination of income tax, corporation tax and national insurance reliefs.