The evidence does not support the theory on corporation tax incidence

I’ve been having a courteous debate with Tom Worstall over the last week on the incidence of financial transaction taxes (yes I know it sounds surprising, but it’s also been true).  At the end of it the best Tim could say was:

For myself, before we decide to change the taxation system for the globe’s financial markets I would insist that we should only be making changes where we can predict both the effects and the magnitude of them.

He came to this position having failed to knock any holes in my logic on the potential incidence of a financial transaction tax on foreign currency as explained in Taxing Banks. I on the other hand have argued that sufficient data to predict the future and the consequence of all action is never available. In that case we use a priori logic, whatever relevant and reliable data we may have to test and a considerable quantity of judgement to decide what to do since the evidence will always be incomplete and the opportunity for error will, therefore always exist.

The difference in contention between me and Tim is not, however, the weight given to empirical data over logic: poor logic can never be resolved by good data. Good data can support logic or give rise to further questions. Therefore anyone of sound mind has to put sound logic ahead of data: to argue anything else is itself illogical.

Rather though the difference between Tim and me is something quite different: I argue that we have to make judgement. Tim is seeking to deny that although I am quite sure that he knows in doing so he is just using a rhetorical tool to object to change to a status quo which he desires and which I abhor — namely the exploitation of society by banks. I seriously doubt he or anyone could believe that action on taxation cannot take place unless it were possible to predict with the degree of reliability he seems to think essential the effect and magnitude of the change they might create. We’re unable to do that. So Tim is either seeking to deny the reality of the uncertainty inherent in the human condition or he is putting forward an argument that he knows to be false in the hope it will achieve his political aim. Not surprisingly we’ve agreed to differ on the outcome of our debate.

I did, however, then ask him to consider the issue of the tax incidence of corporation tax, which I discussed here. He said:

If, as Joe Stiglitz pointed out can happen, the incidence of corporation tax on the workers’ wages is higher than 100%, then cutting corporation tax will increase the workers’ wages by more than the cut in corporation tax. Even assuming that taxes on labour are raised to cover the lost revenue (that no other measures are taken, such as different methods or taxing returns to capital, or spending cuts) as we don’t think that the incidence of taxation upon labour is more than 100% on labour then labour will be better off by being taxed directly rather than indirectly.

In other words, he thinks that the incidence argument suggests that as corporation tax falls labour rates should rise. Note this does not imply that this must be the case in individual companies: it should be so across the economy as a whole. In other words, if Tim is right as corporation tax rates fall then wages should rise. He is unambiguous about this. It’s an a priori argument which can be tested with data. This is data I prepared on trends in corporation tax in the UK from 2000 to 2006 based on detailed analysis of tax paid by  the largest 50 UK companies in that period, published in the Missing Billions in 2008:

If Tim is right wages should have risen as a result. This graph is based on direct download of Office for National Statistics data and shows what actually happened: 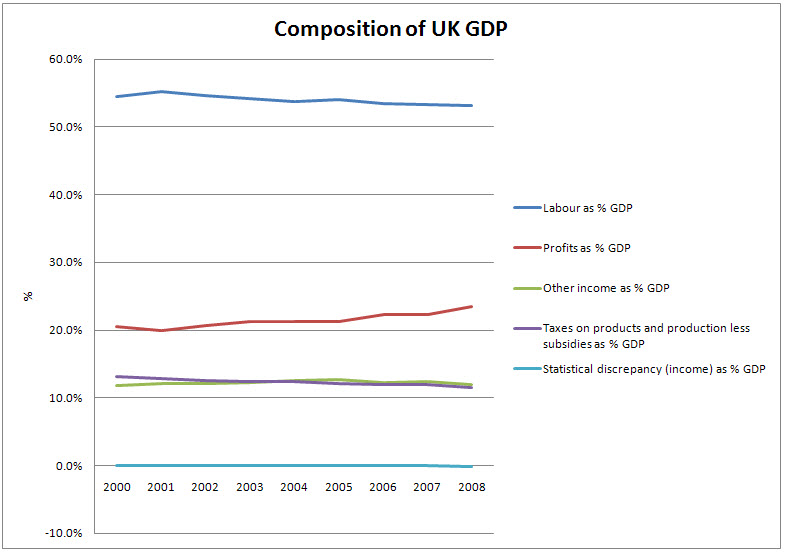 I thin on this occasion the data is compelling and unambiguously supports the logic I have presented that corporation tax cuts reduce the return to labour and increase the return to capital. In other words they reallocate income from those who work for it to those who do not work for it: they reallocate income from the poorest to the wealthiest and they make society more unequal and the tax system more regressive as a result.

Of course, data is insufficient in itself to prove a case. The logic has to be right to. But those who honestly believe that the incidence of corporation tax is on labour are few and far between — and it is their work which has, by and large, lead to the crisis we’re now in. Those who do however think that companies do pay tax and that when they do so the incidence is on capital are widespread, and whilst herds aren’t always right on this occasion the logical flow in their argument is so obvious it is hard to contend with. It just helps that the facts support it.