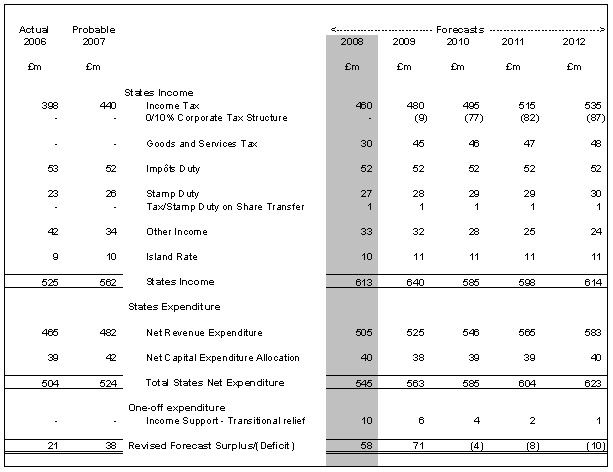 The 2008 revenues are based on specific assumptions about the increase in taxable profits, earned and unearned income for 2007. These forecasts are cautiously optimistic but do not and can not make specific adjustment for the recent 'credit crunch' as figures are not yet available.

I think the term 'cautiously optimistic' is a little wide of the mark. The 'credit crunch' is on the offshore financial markets. It's the SPVs, SIVs and CDOs that are based in Jersey and elsewhere that are being wiped out. New issues are not happening. This credit crunch is not a stage removed from Jersey, as for example the 2000 downturn was. This one is bang in the centre of St Helier for all practical purposes.

But on the back of two good years Jersey is now forecasting growth of 5% when there is every sign that it's only core business sector is in crisis. 0% might be a good substitute.

And the loss from 0 / 10 needs to be properly stated. It is not £77 million on 2010 - even Senator Le Sueur admits it is much higher than that now. I estimate (using his own data) that it is at least £118 million, which will of course rise with inflation. So, let's substitute growth at a generous 1.5% and this real loss into the forecast and this is what happens: 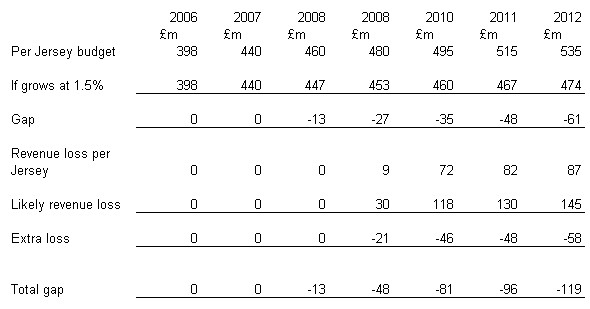 But that's not the end of the story. It's ludicrous that the Budget is based on an estimate of the impact of 0 / 10 calculated in 2005. Tax revenues that year were £370 million and the revenue loss was estimated to be £85 million and income from companies which will give rise to the loss was just £186 million (source, 2006 budget). In 2008 the headline income take from companies is £228 million. Just scale the tax loss up in proportion to that and it has to be £100 million in 2010. If Senator Le Sueur's estimate is under by this sum mine must be as well. That results in the following table, for now: 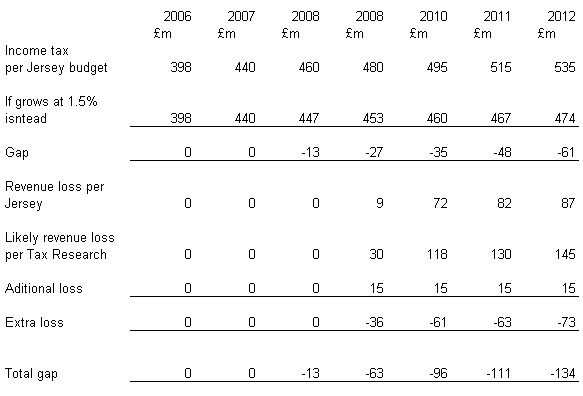