It is not every day that a classic that will be read for years to come is published. Yesterday was such a day. And the classic in question? The Financial Reporting Council's report on PWC's audit of BHS. I have read all 39 pages this morning.

It's hard to describe how shocking the report is. It's especially shocking to me as a former audit partner, and when I compare just how weak PWC's systems were when compared to the procedures my own firm used to follow to ensure audit quality control.

Let me focus on some facts, first of all. These, on hours recorded on the audit, are interesting: 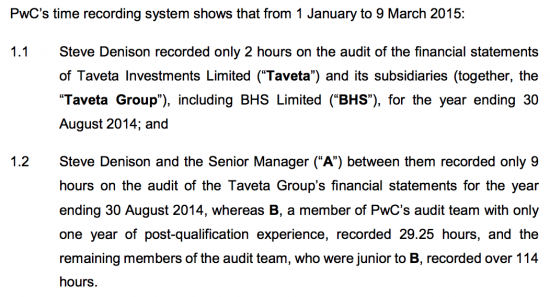 The focus has been given by many to the near absence of time expended by the partner and senior manager. But I am shocked by the tiny total hours: just 154.5 hours, or less than five weeks work, much if it by very junior staff, was expended on this audit. The audit fee was £355,000. The average charge per hour was, then, £2,297. That is either daylight robbery, or someone at the FRC is misreporting facts.

If the hours recorded were true then at every possible level of work this audit could not have been properly undertaken. And gross mischarging took place.

It may have been both. But let's stop the pretence that audit is not profitable in that case.

Overall, there can be no doubt that Sir Philip Green and his companies were of considerable value to PWC:

This ratio is shocking. And what is more shocking is that the audit partner headed the supply of the non-audit services. There was no pretence at a separation of duties and so any audit objectivity. The same person who could give 2 hours to the audit could, over the same period, given 15 times that amount of effort to non-audit services.

And there was basic fraud: 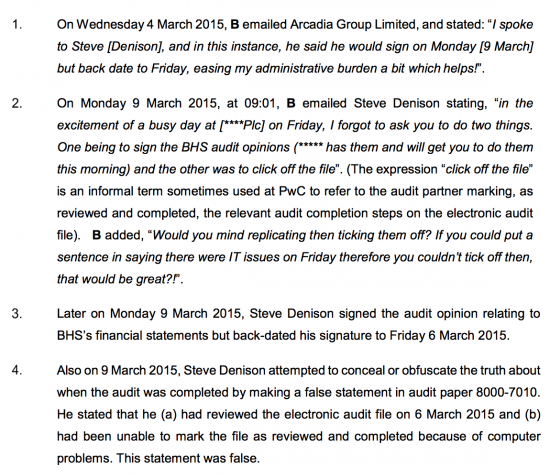 False statements were made.

This is shocking enough, but the gross negligence of the actual audits, outlined in some detail in the report is also incredible. The turnover of BHS was basically not audited: it was only checked as part of the group but individual accounts were also signed off, of course. This was just wrong. Nor were large parts of the cost of sales audited. And major intra-group adjustments were simply ignored. Whilst the basic question of whether a company in such obvious trouble was a going concern or not, and so able to meet its financial obligations, was simply not tested at all. Indeed, the auditor who did most of the work, who had only one year's post qualification experience and may, therefore, have had just four year's experience in all, was not even aware that a sale was planned and did not allow for it in the audit work. Her manager and the audit partner did not apparently notice that deficiency. Which was not surprising as they could hardly have looked at the file at all.

This is not just a tale of woeful incompetence, although it is that.

It's also not just a tale of fraud, although that happened.

It has to be a tale of systemic failure: I cannot believe that this was just the proverbial 'rotten apple', yet again. For such a situation to have arisen here it must have been sufficiently commonplace for no one to have noticed anything amiss in what was happening. The implication is for the firm as a whole, and not just this audit and this partner.

And what of the penalty for such utterly gross incompetence and fraud? At £6.5 million for PWC it was less than a per cent of profit. It was a cost of doing business at more than £2,000 an hour. An inconvenience if the rest of the show can stay on the road.

My suggestion is the Financial Reporting Council has also failed here. PWC should have been barred from taking on new audit work. The FRC should have ordered a review of all its major audit files. Evidence of replication of the risk should have been sought: how many other audits were signed off with just two hours of partner time, for example? It would hardly be hard to identify them, and so pick the files for review, after all. But nothing of the sort has happened. Despite such gross failure, PWC is still selling audit services today.

And the question has, then, to be asked as to why that is, and why this business model is permitted to exist?

There is no value added.

There may be no service at all.

There is just a fee and a veneer of service that the FRC will not disrupt and so the rent-seeking, rather than the service, goes on.

This country; our financial system, and all the people who depend on it; they all need real audit services. I suspect, very strongly, that they are not getting anything close to that service and that BHS is not atypical in any way. PWC just made the mistake of being found out.

This rotten system needs root and branch reform. Of the regulator. Of the obligations of the auditor. Of the law. On the way firms are permitted to operate. And on their accountability.

Will we get it? Or will the rents just continue to flow to those who have not earned them? What do you think?