Irresponsible bankers are already engineering the next global financial crisis

The next financial crisis is being made right now, by bankers. Although Janet Yellen, chair of the US Federal Reserve, has said in the last month that she does not think we need worry about another Global Financial Crisis "in our lifetime" (a measure about as useful as the length of a piece of string) I do not share her optimism. In fact, I suggest her optimism may be the biggest cause for concern and the surest sign there might be that such an event is now on the cards. Nothing is so risky when it comes to financial crises as a central bank that is complacent to risk. That is most especially true when the primary source of that risk is the central bank. And that, I suggest, is the crisis we're now facing.

The risk in question comes from Janet Yellen's stated desire to unwind US quantitative easing. QE is the process where a central bank buys the debt issued (in the main) by the government that controls that central bank. In the UK there has been £435 billion of QE. The net impact has been to cancel that part of the national debt, or more than 25 per cent of it in all. The unfortunate side effect has been that the new money created has largely created asset bubble pricing and done little to promote real economic activity. As a result it can be argued that the bond market, stock market and property markets (at least where bankers have influence) are now all seriously overpriced in the UK.

We are, however, but part players in the global game of QE, as this FT chart shows: 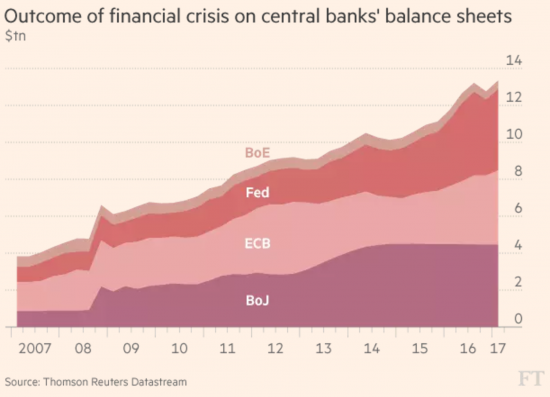 The US Fed, European Central Bank and Bank of Japan dominate this field. Indeed apart from the UK, Switzerland and Sweden they are, I think, the only players. Between them these central banks injected around US$1.5 trillion into global financial markets last year as a result of QE purchases of government bonds. This meant tax was not needed to cover that part of government spending; new money creation did it instead because QE replaces money saving with cash in circulation, albeit that much of it is then saved elsewhere.

The trouble is that Janet Yellen, at least, is indicating that this policy may be reversed soon and all central bankers are beginning to talk about the 'normalisation' of monetary policy. This is a process that means three things.

First it seeks to put the world back to its 2007 state, as if that was a utopia (which it was, for bankers). In particular this seeks to restore the power of bond markets over government who could then no longer ignore the restraint they supposedly impose on government because the option of funding government deficits via QE is removed.

Second, it seeks to impose more 'normal' interest rates to provide positive returns to investors and to supposedly provide central bankers with the option of using monetary policy to control the economy again. This they think important because monetary policy, or interest rate variation in more straightforward parlance, is the only tool central bankers have available to them, and they want it back.

The consequences of this, much heralded and now anticipated, change in central bank behaviour will be dramatic, and almost certainly pretty ghastly.

Let's start with the gruesome consequence for many people. The purpose of this policy is to increase interest rates. There is no beating around the bush on this. The desire will be to get back to positive rates (i.e. after allowing for inflation) of two per cent or so. That means an increase in many bank base rates of well over four per cent. Add this onto payments due from many mortgage and personal debt holders and the balance towards insolvency will be tipped for a great many people. The social consequences are dire.

The economic consequence is also obvious. Bankers will suffer from those insolvencies. They will seek to flood the market with repossessed houses and cars as a result, and there may be price crashes. Banks will suffer real costs as a consequence. The delicate balance in many economies will be destabilised as a result: recession is almost inevitable.

Then there is the consequence for bond markets. The reality is that whilst the market for debt is big, massively increasing the supply of debt will flood it. You can't move from US$1.5 trillion being withdrawn from the market each year by QE to there being net inflows of new money over and above the levels dictated by government deficits without there being massive market disruption. At best bond prices will fall dramatically. At worst, there will be major runs on the bond funds that many investors use to access this market. This will create a liquidity crisis for them: the likelihood of major insolvencies in this sector as a result because cash will not be available to meet the demand of bond sellers will be very high indeed. It is almost always liquidity that brings financial institutions down, and the makings of such a crisis can be easily foreseen here.

And that will have spillover effects for property and stock markets.

And like it or not, that will also have spillover effects in the real economy as cash becomes the product in shortest supply.

And I stress, this shortage of cash will not be by chance: the whole point of the QE programme was to inject cash into the economy. The point of reversing the QE programme is to take that cash out again, to force interest rates up and to increase the cost of borrowing. Removing money from use in this way has wholly predictable consequences in the real economy. One is to dampen demand, which will collapse. The other is to dampen investment, of which there is already far too little. The third, incidentally, is to reduce the role of government by reducing its tax revenues and increasing its cost of borrowing to provide alternative funding.

Try as I might then I cannot find a single upside in what is proposed. I can only find two things. One is downside risk. The other is dogma. I've described the risk. Let me deal briefly with the dogma.

The dogma is based in three ideas. The first is that savings matter. The logic is that savings fund investment and so we need savings. The trouble is that we now know that this is not true. Savings are just money withdrawn from the economy. They do not fund investment. Bank credit does that, and as we now know, bank credit is created costlessly without direct reference to the amount deposited in a bank. Increasing the rate paid to investors is, then, a wholly destructive economic act from which there is no upside but plenty of downside as cash is transferred to those who already have wealth from those who haven't got enough of it.

Second, the dogma is that monetary policy is needed. We now know it isn't. It is fiscal policy that has to be used to manage the real economy. The era of the dominant central banker is over. The trouble is that they yearn for the 1990s when they thought they ruled the universe. Now they don't but dogmatically they do not want to let go.

And third, it is still thought that government must be constrained by bond markets to live within its means, which was a myth  QE shattered but which frightens bankers enormously because in the hands of a socially motivated government QE could be used, as I have long suggested, to fund investment by a government in the real economy to transform the way it works for the benefit of ordinary people, with the conventional suppliers of capital being sidelined in the process. The battle over QE is, then, a battle fir the future of more than money, debt and the public finances; it is battle over who has control within  the economy. Is that to be government and people, or bankers?

Bankers have no doubt who they think should be in control. To seek to re-establish their claim they are willing to act recklessly by unwinding QE. There is no known practical or economic justification for doing this. There are only dogmatic ones. But bankers have their hands on some power and it looks like they are intent on using it for their own dogmatic purposes. If they do they will trigger the next global financial crisis, and well within our lifetimes. This is the battle to come. And it is the surest sign that the lessons of the last crisis have yet to be learned. Irresponsible bankers caused that crisis. It looks like irresponsible bankers are now engineering the next one as well.