The madness gripping the Treasury

Larry Elliott used this graph in the Guardian on Friday: 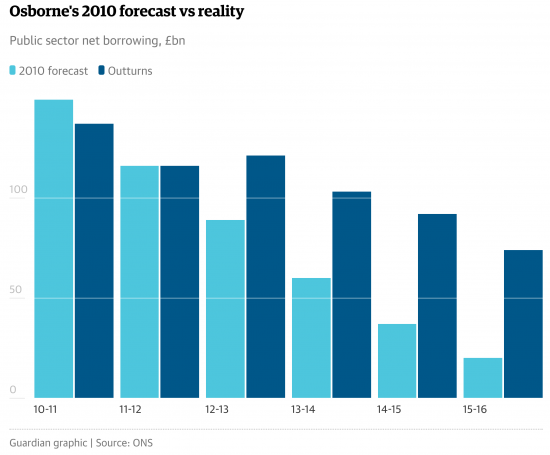 I have prepared a more detailed version in this paper.

At one level you could state the facts: George Osborne got his forecast wrong. You could add that the Office for Budget Responsibility were wrong to endorse it. You could repeat that suggestion for every year where we can compare forecast with outcome since: there has been a recurring, persistent pattern of optimism in forecasts from the Treasury. Stating that this is the case suggests either they are very bad at forecasting or that they have made some fundamental errors. It may be both, of course. My point is that understand this and you understand why we cannot clear the deficit, at least using current policies. This was the theme for a lecture I gave at St Catherine's College, Cambridge, last week. It seems worth repeating here.

In the paper Ronen Palan and I put it as follows:

The government forecaster — the Office for Budget Responsibility (OBR) — is adopting a low, and in our view, unrealistic multiplier for government spending (range of 0.6 to 1.0). This is much lower than the one adopted by the IMF (0.9 to 1.7) or Standard & Poor (up to 2.5). The low multiplier adopted by the OBR has led to persistent overestimation of the benefit of austerity and constant upwards revision of public borrowing needs.

The multiplier is explained here. In summary:

In economics, the fiscal multiplier is the ratio of a change in national income to the change in government spending that causes it.

So the government and OBR will always get their forecasts and policy wrong because they are based on a false assumption. And despite the continuing evidence that this is the case they carry on with them regardless, continually repeating the same mistakes at cost to us all.

As someone once said, repeating the same error time and again hoping that despite all the evidence the outcome may change is a sign of madness. And we're definitely suffering from the consequences of it having gripped the Treasury.