Is the All Party Parliamentary Group on Responsible Tax serious? Or just a KPMG front?

I have just received the following from Margaret Hodge in her capacity as chair of the All Party Parliamentary Group on Responsible Taxation: 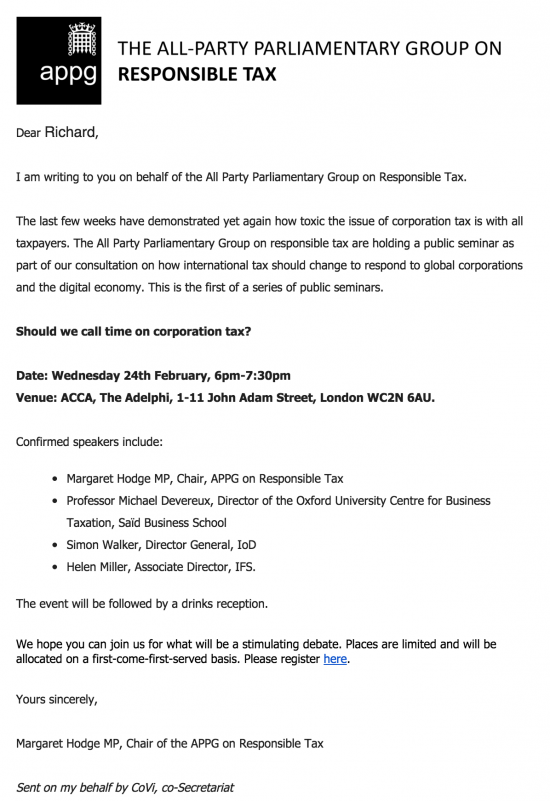 I have to say I find this a quite astonishing line up.

As I noted yesterday, the IoD wants to abolish all taxes on capital, including corporation tax.

Mike Devereux wrote an article for the FT in 2012 under the title 'The best reform of corporation tax would be its abolition', advocating in its place a sales based destination tax - which is very close to being VAT and so a consumption tax levied on ordinary people. Why this, and variations on it would be a disaster I explained here.

And the IFS has always mimicked Devereux on this: he was the key author of the IFS Mirrlees Review on this issue. I don't know Helen Miller but if she follows the IFS line she will be not far from where Mike Devereux is.

So, the likelihood is three speakers who will say let's call time on corporation tax, which is staggering since Margaret Hodge established the APPG by appearing to call in all the NGOs who have campaigned on tax issues to get their support, not one of whom would want corporation tax abolished.

So what's the explanation? Well, first this did not come from Margaret Hodge: it come from Covi. And Covi is KPMG's captive think tank. How do I know: by looking at their funding. In their first annual report, just published, they say their funding is as follows: 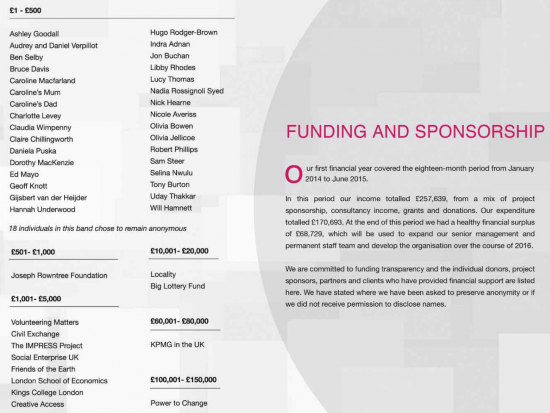 Power to Change did not fund Covi as a think tank: they paid for consultancy. KPMG dominate the think tank funding. And the result is a body that many of us have long suspected might really exist to represent KPMG's views. And Covi runs the APPG. Which effectively means KPMG do.

They might just get away with running one event like this that is so hopelessly unbalanced but do it again and there is no hope of its credibility surviving intact.

If they had any wisdom at all they'd be putting someone like John Christensen of Alex Cobham from TJN on this panel now: then there might be a hope of both balance and credibility with the campaigning groups and NGOs who were asked to lend their support to this group. But right now the APPG's credibility hangs by a thread.