I wrote the following blog in June 2009. Now we have a government proposing to slash public sector employment it seems worth repeating it. The logic has not changed, at all.

“Give or take the public sector employs about 5 million people. If, as is demanded, there should be public sector cuts of at least 10% then maybe 500,000 people will lose their jobs. 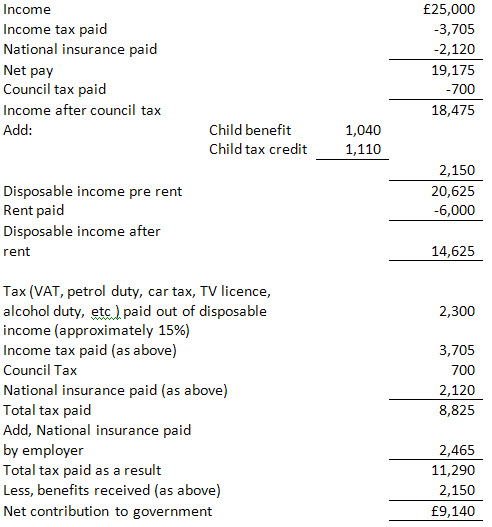 In that case it is abundantly clear that paying to keep people in work pays — especially and even particularly if what they do has long term benefit that saves cost into the future. That cost saving — for instance from green efficiencies - has only to be £2,000 for it to be entirely worthwhile creating a job out of government spending to keep this person in work.

Now let’s reflect on the fact that in reality the average direct cost of employing an average public sector employee is less than this. Let’s make it around £21,000 — more like median pay — and then note that 500,000 at this pay rate will supposedly save £10.5 billion in the wage cost of the government. Putting these half a million people out of work will save us about £0.8 billion. That’s misery for 500,000 people and their dependents to save just £1,600 per job lost.

That though is not the end of it. Total government spending (2009) is £671 billion, split down like this: 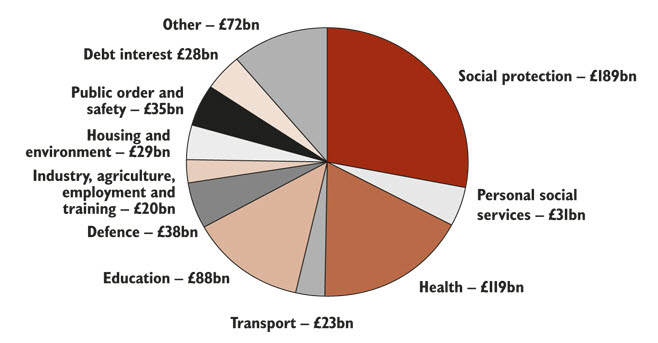 That, with the losses from the public sector adds more than 2 million to unemployment — making well over 4 million in all. Some consider this likely, I know.

Now I know all the problems of extrapolation in here, and I know that not everyone will get benefits in the way I have outlined above (but those that don’t will suffer even more extreme losses in income — compounding losses elsewhere) but frankly all analysis in this area is moving into the unknown, economically and statistically speaking. And losses to government may also be bigger than I suggest — after all out of the £57 billion of non-labour cost cuts required £20 billion will be lost profits and rents — and they could result in £6 billion of additional government tax losses, tipping the equation in the direction of any cuts in government spending creating actual cost for the government.

Which makes clear that the logic of cutting government spending now when we have no jobs for those we make unemployed makes no sense at all. It’s profoundly annoying to have to reinvent the whole Keynesian argument in this way — because that is exactly what I am doing — but needs must precisely because so many do not seem to understand this obvious fact.

Of course this situation will eventually change: private sector demand will pick up and employment with it. But right now there is no sign of that and to cut now would, I can confidently predict, produce something like the outcome I predict here. Put simply: cut spending and we’ll increase government debt. Perverse you might think — but true, and exactly what Keynes predicted.

The answer is simple: if we want to get out of the mess we’re in we spend. It’s the only way to reduce government debt at this stage in the economic cycle. It worked in the 30s. It will work now. Nothing else will.”

That’s why the Tory cuts are going to be a disaster.