Secrecy jurisdictions: who has the highest ratio of GDP generated by financial services?

The report looks at the contribution of the financial services sector to the overall economy of each secrecy jurisdiction surveyed. As we note:

It is almost universally true that the more reliant a territory is upon a particular economic activity the more deferential it is likely to be to the demands of that sector. Such influence can undermine democratic decision making processes, can facilitate corruption, in the case of financial services can create a strong orientation towards the needs of those outsides the territory who would not normally be the prime concern of its government, and can be (but we stress, is not always) conducive to a criminogenic environment.

There was one major problem with the research: so opaque are many of these secrecy jurisdictions that we could not get the data. This is the list of those where we failed to secure reliable data:

Of those where we could get data this is the result: 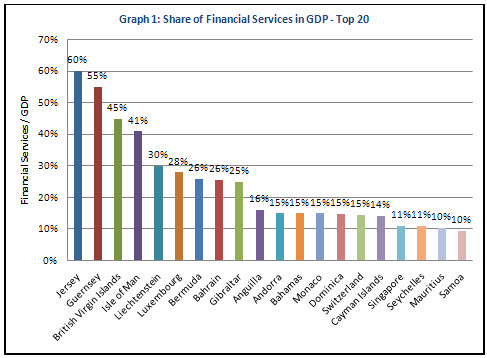 It’s a considerable indictment of the Crown Dependencies that they are so dependent upon financial services. It is right that the UK has demanded that this change in the Foot report. Their economies are collapsing as the offshore world falls apart under the pressure for reform.

And it is essential that they and other states where this dependency is high get the support they need to break the spiral of abuse of the world’s financial system that they facilitate. The cost to the UK of doing that is going to be high. The benefit will be higher.

As I have shown, the cost of these locations to the UK might be up to £4 billion a year, the indirect cost much higher still. Giving them subsidies to reform makes straightforward economic sense, and means it will be so much easier to pick off those places that remain in the secrecy world.