I heard another person telling bare faced lies about UK debt this morning on Radio 4. The claim made was we have the worst debt in the industrial nations of the world and we’ve never faced such debt in peacetime.

Both are brazen mis-statements of the truth.

Current and expected debt looks like this, and the UK figure is inflated by our banks: 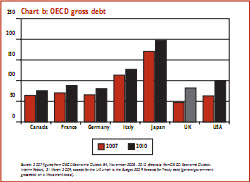 Now tell me how we have the highest debt? And don’t bother to mention unfunded pensions etc and PFI: the rules used here are consistent. So to those who promote these ideas I have one simple message, stop lying.

And there’s a message for Cameron and Osborne as well, This is the Tory record:

When faced with recession the Tories let debt rise. Labour reversed that, although it should not have overspent after 2004, I agree.