Jersey: a house built on sand

Jersey has issued its Economic Digest for 2007. It is a fascinating document. These are some of the highlights:

¬? In 2006 Jersey's total GVA increased by 7%, the largest real-term increase seen for at least eight years;
¬? the profits of the Finance sector rose to more than £1,310 million, an increase of 25% on 2005 (up by 21% in real terms);
¬? in June 2007, 55,140 people were employed in Jersey, representing the highest June figure for nine years;
¬? the Finance sector saw total employment rising to 12,660, the highest figure recorded by the Manpower Survey;
¬? over the twelve months to June 2007, average earnings in Jersey grew at an annual rate of 4.7%;
¬? the average price of dwellings sold in Jersey in the third quarter of 2007 was more than a sixth (18%) higher than that for 2006;
¬? the new Jersey Private Sector Rental Index indicates that average rents in the private sector have increased at a higher rate in 2007 to date than in each of the previous four years; and
¬? since 1990 house prices have increased faster than both retail prices and earnings (6.8%, 4.2% and 5.3% per year, on average, respectively).

All of which hides the real truth:

2) Agriculture fell by 16% in that period, manufacturing by 30% and tourism by 12%. Retailing fell by 1% - a sure sign that all is not well in Jersey's domestic economy.

What does this all say? Simply that here we have an economy that is now wholly reliant on finance and all other activities are dying.

But those who lead Jersey are happy. There has been short term growth - and house prices are sky-rocketing, as are rents. Both of which mean that the ordinary people of Jersey are finding it ever harder to live in their own jurisdiction.

But let's look at the statistic they really like. This is that Jersey's Gross National Income per capita has sky rocketed: 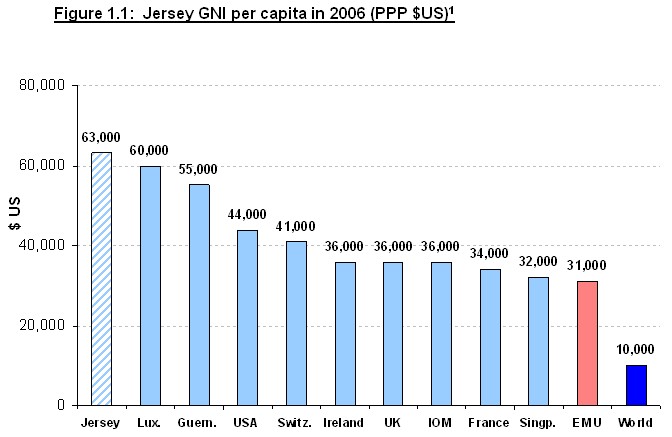 Do they seriously expect us top believe that this is a sign of economic health? It isn't. First of all, this income is not shared with local people. 52% of GVA is in the finance industry. GVA per employee looks like this: 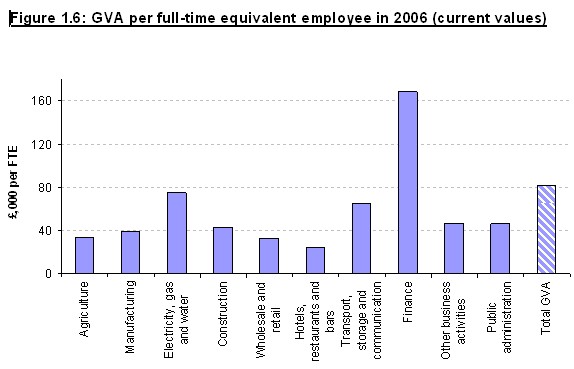 But this is no indication of wages. Profits in the finance industry were £1.3 billion out of total GVA of £3.4 billion. That profit is £103,000 per employee. That means total costs per employee amounted to about £60,000. After overheads that means many employees in this sector are being remunerated at little better than the average rate across most other sectors in the economy. This is no cause for celebration. And it means the GNI data is bogus, to put it nicely. Because all these statistics really mean is that more profits are being laundered by financial services institutions in Jersey at present than was the case over the previous year or two. And that's it.

Those profits were not earned there. They were relocated there. They needn't stay there. They are simply a temporary book entry before being used elsewhere. Is the ability to launder profit something to crow about? I don't think so.

And now let's look to 2008. Securitisation is dead. That knocks a massive hole in the only 'legitimate' financial services activity Jersey has. Banks are in trouble. Profits will be down. People are avoiding risk and investing in identifiable asserts in their domestic economy.

Where does that leave Jersey? Dead in the water, with all its assets in a business model that is failing. A bit like Northern Rock really. But it will probably be cheaper to bail out. That's the only consolation.

I just hope there's a line in the long term UK budget for doing just that - at price of a loss of quasi-independence. It will be needed, and probably sooner than I have predicted given the way the downturn will hit Jersey. It's not going to be a fun place to be in the near future.