I posted this new chart published by the IMF on Twitter yesterday: 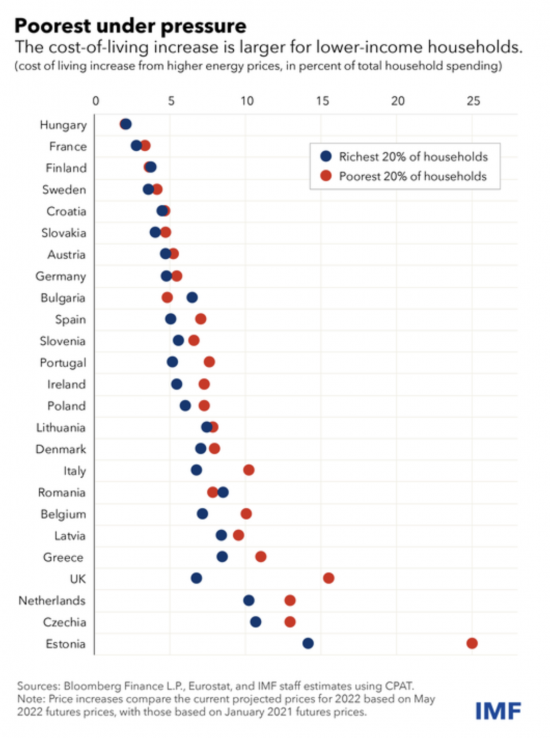 By this morning it had been viewed 941,000 times. The reason is not hard to find. What is extraordinary about the chart is that it shows that whilst the wealthiest 20% in the UK will suffer inflation resulting from the rising prices for gas and electricity of approximately 7% of their household spending - which is around the European average - those in the UK on the lowest 20% of incomes will suffer an inflation rate of 16% for that same reason.

As is apparent from the chart, with the exception of the outlier of Estonia, this is the highest inflation rate for low-income households, and the differential between high and low incomes is also the highest, Estonia once more apart. What is more, compared to countries of similar size, it is apparent that the UK is doing very badly indeed.

So why is that? First of all, we have a government that simply does not care. It has not been willing to intervene in markets to prevent this from happening. Other governments have been. And that is why we have higher inflation, as I have been pointing out for a long time.

Second, UK electricity pricing is heavily biased in favour of producers - guaranteeing that even the most marginal of them should be profitable, come what way. If only we had a system where cross-subsidy was permitted between methods of production the cost of electricity to consumers in this country could be much lower. But dogma does not permit that here.

And then there is the institutional bias against the poor in the UK utilities market - where those on the lowest incomes are forced by energy companies onto the highest tariffs and have to pay upfront via slot meters for the energy they consume. No doubt our government would argue that it is woke of me to point this out, but this is state-endorsed oppression of the vulnerable in our society, and it stands out by a mile in the above chart.

What could we do about this?

Four things. First, we could require that those on lowest incomes are offered the best price tariff from all suppliers. It would really not be hard.

Second, we could end the insult of standing charges that hit those on the lowest incomes hardest: they are pure exploitation.

Third, the regulator could provide the mechanism for cross-subsidisation between electricity producers so all made a normal level of profit but the consumer price was minimised. This would not end profitability, but it would stop exploitation.

And fourth, the government could reduce taxes, temporarily to cut the inflation rate. This is regressive, but if a strong redistribution package through benefits was used to match this it could be made progressive.

In other words, the institutional bias against the poorest in this country could be eliminated and inflation, in general, could be tackled by active government management. But no one is talking about it. Why not?